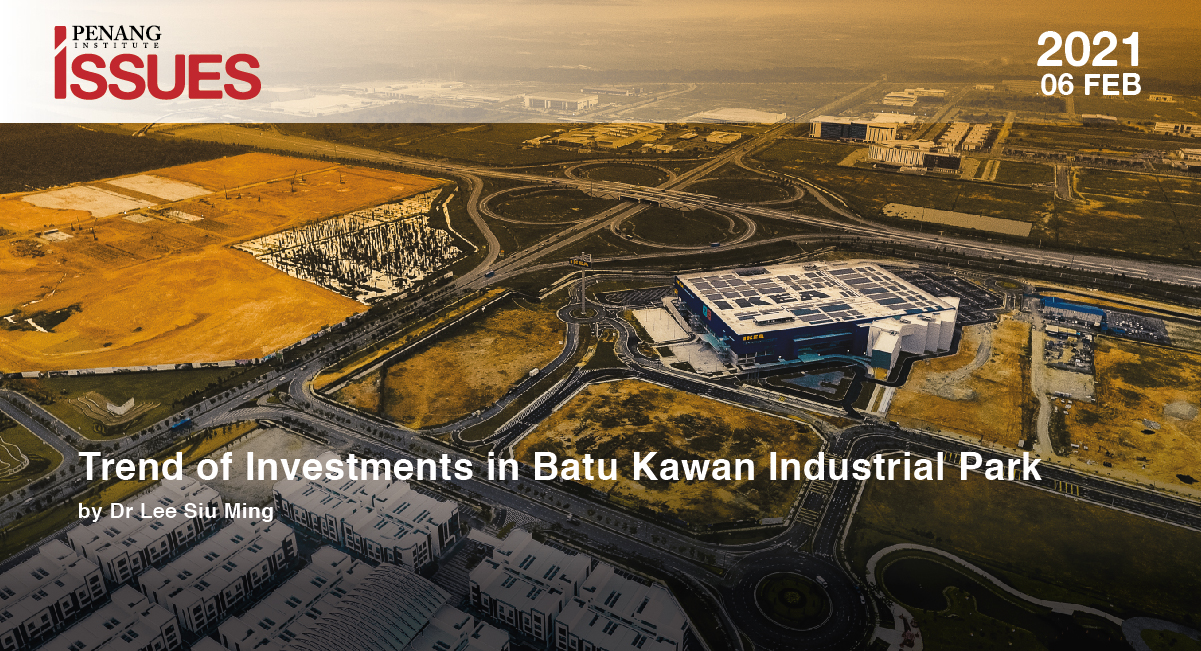 Batu Kawan Industrial Park (BKIP)[1], which received its first investment slightly more than a decade ago, has emerged as one of the most dynamic industrial hubs in the country. In Malaysia’s Budget 2021 speech, the industrial areas of Batu Kawan in Penang and Kulim in Kedah were specifically highlighted when the investment package for high-technology and high value-added investments (including research and development (R&D) investments in aerospace and electronics cluster) was announced. This reflects on the prominence of Batu Kawan as a premier technological hub, not only for the northern region but for the country as a whole.

The state government has also announced that the Penang Development Corporation (PDC) will be developing 1,156 acres of land at Byram, Nibong Tebal, as Batu Kawan Industrial Park 2 (BKIP2). This indicates the robustness of developments taking place in the existing BKIP, and a positive outlook for Penang’s industrial development. Notwithstanding the prevailing debates on investments into Malaysia, there is a great need to discuss positive cases of investment promotion and attraction (both foreign direct investments (FDI) and local direct investments (DDI)). Developments in BKIP project the industrial park as a good case for cogent discussion. This is also in line with the Federal government’s aspiration to create more investment destination and for companies in Malaysia to move up the value chain in high-technology sectors such as the semiconductor industry (see PMO: Malaysia pledges to further create attractive investment destination, 14 September 2020).

This brief analyses the investment inflows and developments in BKIP, and includes a discussion on job creation, clustering, and economic spillovers.

Beyond a Decade of Investments in BKIP

Since BKIP is located in the Seberang Perai Selatan (SPS) district, this study uses approved manufacturing investment data (publicly available since 2015) in SPS as indication of investments in BKIP and the surrounding areas.

Investments in BKIP consist of a good combination of FDI and DDI in sectors promoted by the state. Based on the data in Table 1, many of these investors are industry leaders in their respective segments. The key industries are electrical and electronics (E&E), machinery and equipment (M&E), and medical technology. Notably, Penang continues a strong and sustained relationship with investors, as reflected in the continued inflow of re-investments in BKIP. Arguably, the most immediate effect of investments at state level is the creation of jobs.

Figure 1: Percentage share of investments in Seberang Perai Selatan and other districts in Penang, 2015-2019

Table 1: Public Announcements of Investments by Companies in BKIP (2011-2020)

In parallel with the trend of the state’s total approved manufacturing investments; companies from United States, Germany, United Kingdom, Japan, Singapore, and Malaysia are among the largest source of investments into BKIP. Another noticeable trend is that many investments in BKIP are re-investments, indicating continued confidence in expanding operations in Penang.

With record-high approved FDI in the past two years, which are mainly high-technology projects, the multiplier effect is expected to spur the growth and development of local firms in segments such as semiconductor and semiconductor-related industries, wafer fabrication equipment and critical sub-systems, 5G, automotive electronics and electric vehicle related supply chain. Domestic investments are expected to rise as more of the announced FDI projects are being realised. Unsurprisingly, in the first month of 2021, two companies that announced their expansions in BKIP are Malaysian companies with plans to expand their capacities.

1. BKIP is an extension of Penang’s solid industrial foundation
Penang has a cumulative industrial experience of about 50 years from the period of the Bayan Lepas Free Trade Zone (FTZ), the first FTZ in Malaysia. Penang positioned its industrialisation with a focus on the E&E industry. Branch plants of multinational corporations (MNC) were successfully attracted to set up here. In the 1970s and 1980s, ancillary companies emerged to meet the supply chain demands of the major firms. The textile and garments industry also prospered. In the 1990s, the expansion in industrial sectors included plastics and chemicals. Today, over 300 MNCs and over 3,000 supporting small and medium enterprises (SME) have made Penang their destination of choice.

It is clear that BKIP plays an important role to support Penang’s industrial growth. The foundation built during the past decades allow for more robust activities in the state, and BKIP plays its role as a factor of production for many corporations. Evidently, many investments and re-investments are still in the E&E and M&E industries which the state has a proven strength in. Re-investments show upgrading from previous activities and/or expansion to other business and operations functions. It is also pertinent to note that more local companies have shown strength in respective sub-segments[2], and tapped on BKIP to expand capacities and capabilities further.

2. Industry clusters and SME development
It is encouraging to note that several industry clusters form part of the BKIP development. In particular, the Penang Automation Cluster features three locomotive local large companies (LLC) namely Vitrox, Pentamaster and Walta spearheading the first SME precision metal fabrication or automation cluster in Malaysia. The spillover and multiplier effect is expected in terms of expansion of capacities and capabilities. The participating SMEs (expected 17 participants) have opportunities to gain knowledge, skill and technology transfer in this one-stop metal component supply chain hub. The details of the project imply that there will be opportunities for the SMEs participating in the project to increase capacity and achieve better economies of scale.

Meanwhile, in the investments by five goldsmith and jewellery manufacturing companies under the Penang Goldsmith Association, the investments also showcase marked expansion in capacity in an industry with a long-standing history in the state. The clustering also allows for shared common benefits such as higher visibility to the industry, and shared security.

Industry clustering has shown successes in economies like Taiwan and South Korea (see Wang (2002) and Dayton (2020)), and strategic clusters that develop innovation and localisation through technology and knowledge transfers should continue to be promoted and facilitated by the government.

3. Capitalise on the growth trajectory of the industrial park
BKIP is undoubtedly the core of industrial activities alongside innovation and R&D stimulation in the promoted industries in Penang. As these activities increase in terms of robustness in BKIP, the surrounding purpose-built offices (PBOs) should also capitalise on such developments. Global business services (GBS) activities have grown significantly in Penang and key PBOs developed by PDC such as GBS@Mayang and GBS@Mahsuri in Bayan Baru[3] serve well-known names that have set up their GBS operations in Penang, adjacent to Bayan Lepas Industrial Park. PBOs developers and owners in Batu Kawan and state agencies could replicate such a model and encourage high-quality GBS operations in BKIP.

4. Upgrading in socioeconomic status in SPS
Notable spillovers in terms of socioeconomic improvements in SPS district have been recorded in recent years. In terms of household income, SPS recorded the highest CAGR (2016-2019) for median income at 6.0%. In 2019, SPS also showed an increase in the income share of the state at 10.2% compared to 8.7% the previous year. SPS held the smallest income share in the state compared to four other districts, but this is also linked to the fact that SPS has the smallest share of population. SPS also exhibited a rise in income share for T20 (from 2.7% to 3.3%) and M40 (from 3.6% to 4.7%), and at the same time a reduction in B40 (from 2.4% to 2.2%) (see Penang Economic and Development Report 2019/2020 for more discussion on socioeconomic analysis in Penang).

However, it is challenging to (1) quantify the direct contribution from developments in BKIP or Batu Kawan, or (2) nett off factors of production not within SPS (such as workers from other districts that travel daily to BKIP); but undeniably, BKIP as the core industrial, innovation and economic zone in SPS has spurred the rise in socioeconomic status in SPS district, and the mainland of Penang.

A note: Details matter, really
Often, public investment announcements and data presented include investment value, job creation and the business activities that will take place. However, due care should be exercised when examining available data. For example, publicly-announced investment data are usually committed investments for a certain period, for a projected number of jobs. Hence, when one only views investment value per se to ascertain whether a committed investment is better than another, it may lead to inaccurate inferences.

The quality of investment, quality of jobs created, potential technological and economic spillover, and localisation opportunities require much deeper analysis. Such data may or may not be publicly available for each investment project. Complementary but vital indicators such as gross fixed capital formation (GFCF), rate of realised investments, new products and lines introduction and potential higher-segments investments should be part of the process to examine investments inflows.

As the state develops 1,156 acres BKIP2 (and more industrial areas), some key challenges persist and require attention from various stakeholders:

In this brief, it is discussed that BKIP internalises and is a reflection of Penang’s cumulative industrial experience. The industrial park also shows the case of Penang and Malaysia augmenting comparative advantage to further the progress of key promoted industries. Nonetheless, with more emerging investment hubs in the region, expanding BKIP’s, Penang’s and the country’s industrial development requires more synergistic co-operation between all parties.

[2] This includes in the sub-segments of outsourced semiconductor assembly and test (OSAT), automated test equipment (ATE) manufacturing and automation.

[3] Notably, PBOs are not only in Bayan Baru area.