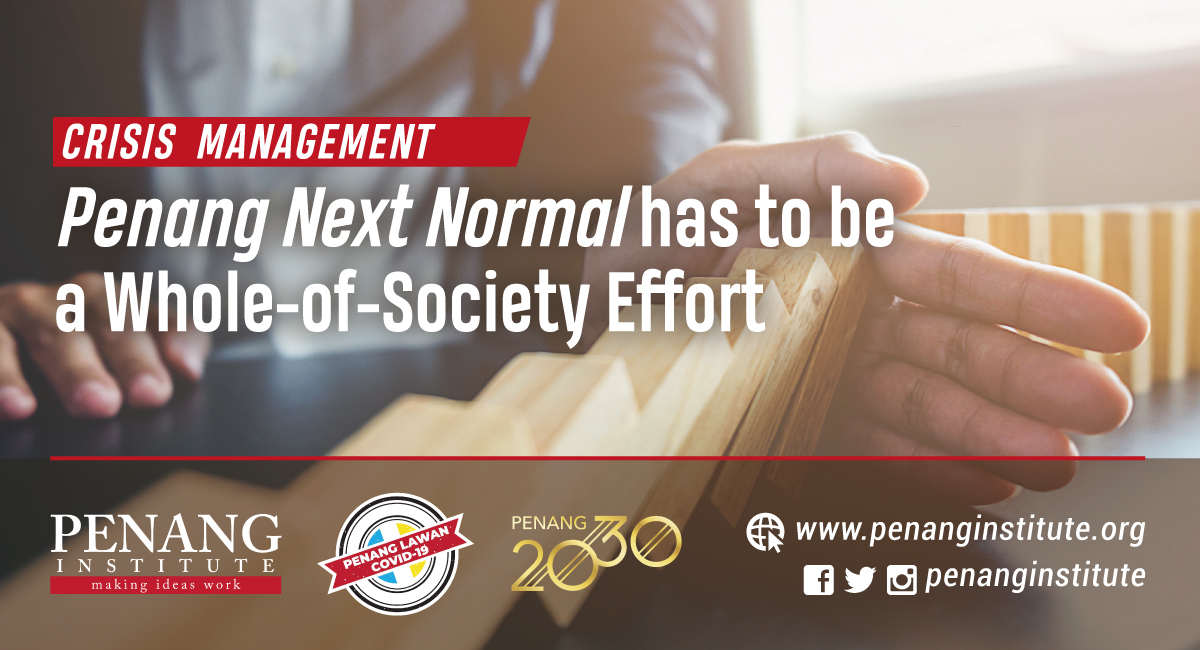 For the first time since World War II, the world economy as a whole is grinding to a halt. Economic commentators and actors, including the International Momentary Fund (IMF), agree that the crisis is the worst since the Great Depression of 1929. No one was really prepared for the economic chaos and personal disasters that the Covid-19 pandemic has brought.

We must all brace ourselves for the long haul. There will be a new normal whether we want it or not, and much of what we have taken for granted will not remain. It is therefore wise for us, while fighting the outbreak today, to plan for a future adapted to the lessons that we have had to learn so painfully these past months.

In this time of grave crisis, and as the head of the State Government of Penang, Malaysia, I have together with my team and the people of this state adopted and applied the following approaches:

Both of these form the crux of our strategy. We call it the “Penang Next Normal”, an approach that highlights and balances public health with economic health.

The Penang Next Normal strategy has three major missions:
1. To consolidate the socioeconomic ecosystem in Penang;
2. To align policies and public consciousness to present and future changes; and
3. To build systemic resilience in the face of future emergencies.

Among other things, the State of Penang is unique in the sense that it has a strong industrial base, built over half a century; and since the early 1970s, it has inspired other industrialisation efforts nationally.

Since relations and mutual understanding between the State Government and the private sector have always been strong, my government has confidently instructed its premier development agency, the Penang Development Corporation (PDC), and InvestPenang, the State’s principal agency for promotion of investment, to engage the manufacturing industries in these difficult times.

Both sides have great need to think ahead and to collaborate in meeting the immediate challenges brought about by the social distancing measures in Malaysia, and in face of the diminished flow in capital, goods and labour. Most central to our concerns has been the needs of the front-liners in the fight against Covid-19, and an immediate concern has been the possibility of converting local production capacity towards that end.

The Penang State Government’s major course of action is characterised by the following:

1. Building on Penang’s current strengths as a sophisticated global manufacturing hub supported by a large pool of knowledge and skilled workers, we wish to enhance the ability of our manufacturing potential to produce medical supplies such as masks, personal protective equipment (PPE), ventilators, hand sanitizers and other necessary items.

2. Building on Penang’s current position as a hub for food, agriculture produce and fisheries, we are working systemically to supply more and more fresh food and processed food for all Malaysians over the coming months and years.

3. Building on Penang’s strong global reputation in the electronic and electrical industries, we would like to encourage innovation and production of next-generation technologies, gadgets and products after the worst of social distancing measures in the nation – and the world – are retracted.

This requires a whole-of-government effort; and in the implementation of necessary measures towards those goals, we hope to inspire the Federal Government of Malaysia in that direction, and to convince it to share this national vision and to see the value in letting Penang help the nation along the path that we have outlined.

The State Government, together with the local authorities, is working around the clock to ensure that the people of Penang remain as healthy as possible, so as not to put extra stress on the already-burdened health system. Clearly, this requires a whole-of-society effort.

2. Building on Penang’s culture of cooperation between state and people, the local authorities have been instructed to work even more tightly with the people towards making Penang a cleaner, healthier and greener state, and to sustain that into the post-pandemic era.

3. Building on Penang’s current strength in the prevention of diseases, we have tried to do everything possible to bring down the number of hospital patients suffering from other illnesses during the pandemic.

4. Building on Penang’s current tradition of organised altruism, we realise that in a pandemic, we are only as strong as our weakest links. And if there are people in our society who do not have food, shelter and basic healthcare, and thus are infected by Covid-19, the whole of society will suffer. The State Government has therefore been collaborating more than ever with various organisations and individuals known for their charitable work.

We are thus promoting the spirit, in our national language, of #kitajagakita (we take care of each other) to build solidarity with the vulnerable. All these require a whole-of-society effort.

Path to the Next Normal

The number of cases in Penang is among the lowest in the country, with only one death confirmed. As of 2 May 2020, the national figure for mortalities is 103. With Penang having a population of about 1.8 million, this is indeed a commendable situation.

Our frontline staff have been working hard since the outbreak of Covid-19. The police, the National Security Council, Health Department, Immigration Department and many more, have done their best, at risk to their own lives, and are continuing to do so.

Non-governmental organisations (NGOs) and private companies have also been very committed in their efforts. We have received support from them, either in the form of cash or donations of much-needed material, such as face masks and gloves for our front-liners.

I sincerely hope the Federal Government will support the Penang State Government’s vision, mission and strategies to combat Covid-19 as well as to prepare for the Next Normal. The State Government will be strongly supporting the digital platform in the economic sector – on development projects, foreign investments and job creation.

We can best meet the Next Normal prepared if we combine whole-of-the government and whole-of-society efforts already while fighting the worst of the pandemic.