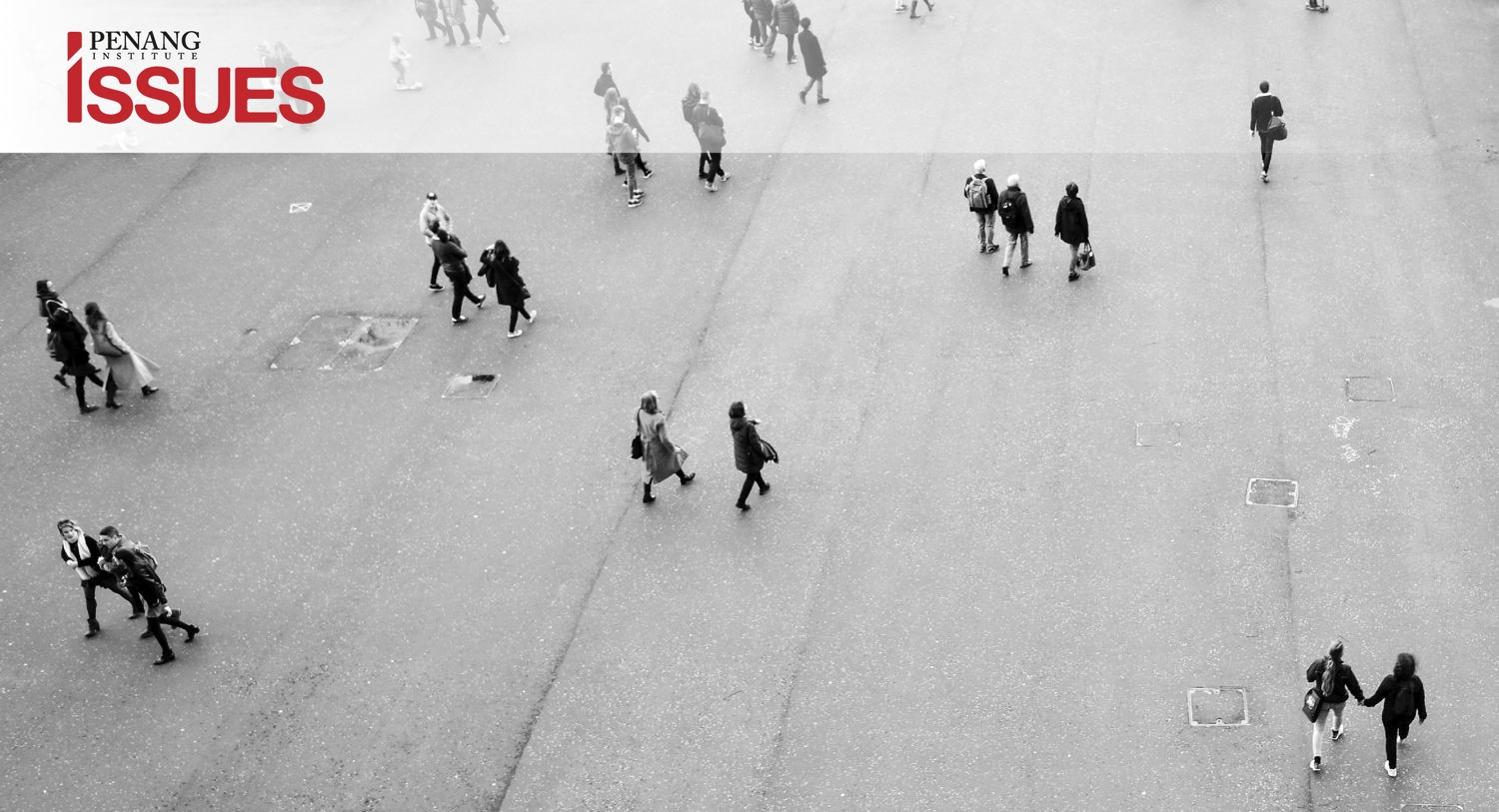 ▪ Consolidating a geopolitical middle ground between the U.S. and China to minimise the
possibility of a binary framework;
▪ Democratising the economy, and;
▪ Rebuilding state capacity and democracy.

Recently, veteran American diplomat Henry Kissinger talked about a new era when interviewed by Financial Times on the consequences of the war in Ukraine. In his own words, the 99-year-old diplomat said, “my appeal in general, on whatever side you are, is to understand that we are now living in a totally new era”.

I am in agreement with him on that and to the suggestion that such a period requires deep contemplation and concerted action from progressives around the world.

When historians look back on our times, they may find that the period from the fall of the Berlin Wall in 1989 to 24 February 2022 when Russia invaded Ukraine was somewhat like an “age of innocence”. It seemed that large-scale conventional warfare, especially in Europe, was a thing of the past. But clearly, it isn’t.

The world order led by the United States since the end of the Second World War peaked with the collapse of the Soviet Union in 1991. That was a triumphant time for U.S. military and economic prowess, as well as for the neoliberal economic model and the Washington Consensus.

U.S. dominance is now fraying in part because of the rise of China as a “peer competitor”, and in part because of U.S.’s internal weaknesses over the past decades caused by inequality, political divisions and failing institutions.

While the world now searches for a new order, the matter is not going to be about a simple—and simplistic—replacement of U.S. leadership with that of China’s. The U.S. will remain the strongest superpower on Earth for a long while to come. What will be new is that there will be other relatively strong major powers existing alongside the US. There will also be many middle powers, and some of them are trying hard not to fall into the binary trap of U.S.-China competition.

Progressives in the world need to “think system”—to consider broad changes—and not to be seduced or distracted by piecemeal and short-term quick fixes. The problems the world is facing today are interconnected and multifaceted. Bold paradigm shifts are needed to deal with at least four major challenges confronting us:

First of these are Covid-19 and other pandemics

Covid-19 has disrupted the workings of the globalising world very badly and recovery from its impact will be a slow one. What we have to learn from it is that there will be pandemics to come, which the world will have to grapple with.

Lockdowns in China continue, and are causing huge disruptions to global supply chains and contributing to mounting inflation across the globe. The recovery period throughout the rest of the world continues to reveal the deeper socio-political and socio-economic and socio-psychological impacts of this virus.

What is also obvious is that this powerful pandemic has seriously discredited the neoliberal idea that the state is an unnecessary nuisance and that national borders no longer matter. During Covid-19, the decisions, or the lack of them, by national governments within their national boundaries clearly held life-and-death consequences for the people, and this was evident for all to see—and suffer.

Second is the Ukraine war and the ensuing geopolitical crisis

The war in Ukraine has caused food and energy prices to rise and led to shortages across the world. Needless to say, this will impact political stability in many societies.

The conflict has also forced a rethinking in many countries especially those in Europe on matters related to defence and security. However, the “totally new era” Kissinger spoke about does not—and should not—signal the start of a global arms race. The new consciousness about defence and security can instead push nations to shape a functioning new world order that will underpin peace in the decades to come.

Third is the financial and economic crisis

The era of monetary easing central banks’ which began during the 2008 global financial crisis is coming to an end. Now, when the U.S. Federal Reserve increases interest rates, central banks in other countries, such as Malaysia, will have to decide whether to let their currency slide vis-a-vis the U.S. dollar as hot money rushes to the U.S., or allow for domestic interest rates to rise, which will pose another difficult set of challenges.

The increased financialisation of housing around the world, especially in the Anglo-Saxon countries, but also including Malaysia, may face its reckoning in a high interest-rate environment. Economies with high public and private debts will be under persistent threat.

Fourth is the climate crisis

The climate crisis is not going away anytime soon, and will in fact only exacerbate. The war in Ukraine has resulted in both high energy costs and a reduction of fuel supply due to sanctions on Russia. The green transition will be hampered in the short run. This, however, is also an opportunity for the world to effect more climate-friendly practices.

The climate crisis is also, more than ever, taking on a geopolitical dimension. Some of the climate-threatened Pacific nations are turning to China for aid, frustrated by the lack of action from the West.

Given this time of conflated crises, progressives throughout the world should be bold, and envisage an accelerated progressive agenda for the new era. The following are some suggestions that I think should be central to such an agenda.

A) Consolidating a geopolitical middle ground

There are two ways to look at the unease in U.S.-China relations.

First, as former Prime Minister of Australia Kevin Rudd suggested in his new book The Avoidable War, the U.S.-China competition has to be managed by both powers as well as others, to ensure it will not deteriorate.

Second, the rest of the world should avoid falling into a binary framework, and progressives should try to establish a middle ground to minimise that possibility.

During the Cold War, the two opposing blocs were not as connected economically as the U.S. and China are now. Back then, there was also much less foreign policy independence among other states.

Today, China’s economy is highly connected with the rest of world. For instance, China is the largest trading partner for all ASEAN states, and being an immediate geographical neighbour to Southeast Asia, this major power—and its influence over the region, is not going away over any imaginable length of time.

We are entering into an era in of mini-laterals, and geopolitics will be like an ala carte menu rather than a fixed set lunch menu. The simple fact is that most countries, big and small, do not want to be forced to order set lunches.

An interesting case in point is India. Though part of the Quad, which includes the U.S., Japan and Australia, and which has occasionally taken hardline positions vis-a-vis China, India has been very ambivalent about the Russian invasion of Ukraine, in part due to Delhi’s long-term defence collaboration with Russia especially in defence and arms supply.

There are clearly many middle powers in existence, all aiming to exhibit some autonomous agency; this contrasts greatly with the era of the Cold War. As outlined by Malaysia’s inaugural Defence White Paper released in 2019 by the Pakatan Harapan government, Malaysia also aspires to be a middle power, and to have more of its own say in global affairs.

Organisations like Progressive Alliance should therefore see the importance of “Asia Pacific” as a region and as a label. While the term “Indo-Pacific” may fit comfortably into the U.S.’ strategic agenda, it should not automatically and necessarily be the operating framework for the rest of the world. Surely, “Asia” and “Pacific” are names whose ownership naturally belongs to the peoples of Asia and the Pacific.

Much as the Ukraine war has brought transatlantic unity to new heights, it is important for Europe not to put all their eggs in one basket but instead continue to work on the Eurasia project where Europe is not just a junior partner to the United States.

The geopolitical middle ground is crucial in a time of great power competition. That needs to be secured and consolidated for world peace to be possible.

B) Democratising the economy

Progressives also have to steer the world’s economy away from the neoliberal frameworks.

Even the World Economic Forum is now talking about moving away from the sole focus on shareholder interests to a form of capitalism that takes various stakeholders’ interests into account, such as those regarding the climate, workers, and consumers.

Combating inequality and securing production processes are not just the stance of progressives but also in the interest of other shareholders. Therefore, the equation for economic growth must include these other crucial factors.

The combined crises of the Ukraine war, Covid-19 lockdowns and climate upheavals have forced the world’s production to move from just-in-time to just-in-case, from efficiency to economic security and resilience. This reverses the strategy of outsourcing from the First World to the Third World that began more than 50 years ago.

The opposite of outsourcing is not necessarily home-shoring but a shorter supply chain or maybe “friend-shoring”, which places production processes outside of less-friendly or hostile countries.

Fundamental to these issues are jobs and economic security for citizens in national democracies. For a society to thrive, democracy has to deliver jobs and hence food to the table, and that the system of delivery of social goods does not leave anyone behind.

A rethinking about the outsourcing processes of the past half-a-century is badly needed, and this provides an opportunity to put jobs back at the centre of national debates.

Progressives will also have to push at the forefront of political debate key issues such as food security, health security, opportunity for women to participate equally in the economy, the right to education, good public transport, and care for the aged.

If jobs are at the centre of the debate as a rule, advanced societies will have to shoulder the responsibility of helping developing countries ensure that labour rights are protected and workers well treated. Outsourcing should not be a race-to-the-bottom.

In this “totally new era”, therefore, we need to democratise the economy and our watchwords should be resilience, economic security and international solidarity.

To rebuild democracy, the world needs to rebuild the state and articulate its missions and purposes. Over the past decades, the constant tax cuts for the rich and the dismantling of the state in favour of the market have resulted in poverty and shocking inequalities, and provided fertile ground for right-wing strong men to fill the void of leadership.

The dismantling of state institutions and of democracy in the U.S. will have huge consequences for the rest of the world, and a return of Donald Trump in 2024 would challenge the progressive agenda most seriously.

What is now needed is for countries to develop a democratic, purposeful and effective state. Only with strong capacity can states stimulate growth, distribute the fruits of growth, ensure society’s wellbeing, and pursue global peace and security.

Progressives have to articulate the middle ground in great power competitions, herald a new framework of resilience and economic security, and champion the return of state capacity and democracy.

[1] Liew Chin Tong is the Deputy Secretary-General of the DAP and State Opposition Leader in Johor. He is a member of Penang Institute’s Board of Directors. This article is adapted from a speech he delivered at the Progressive Alliance Conference in Kuala Lumpur on 25 June 2022.