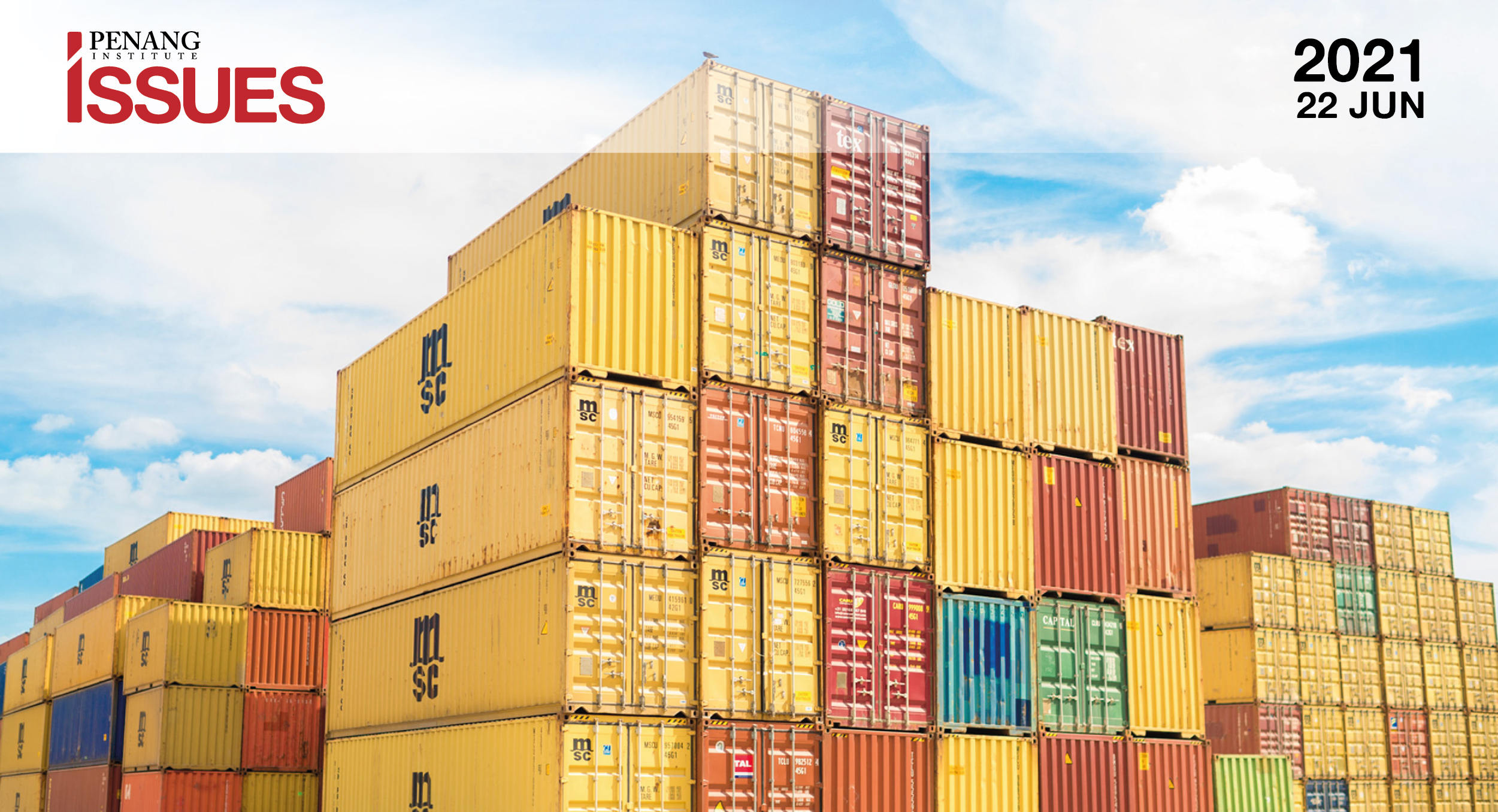 – There is a need to look beyond headline external trade data, and appreciate deeper and more important details of Penang’s trade and economic structure.
– Penang’s external trade performance shows the need to upgrade the infrastructure and the connectivity of the major trade channels in the state.
– Penang should take advantage of its current economic structure to expand its trade in services.
– Given the steadily increasing volume of trade, use of technology and digitalisation in logistics and warehousing in the state should be enhanced.

As an industrial hub for Malaysia and the region, Penang has always maintained a remarkable external trade performance (Penang Institute, 2020). Notably, engaging in trade was not foreign to Penang prior to the state’s industrialisation, as the state was a major free port in Southeast Asia before growing to become a key industrial hub within the global production network.

A conventional analysis of trade channels shows that about a quarter of exports from Malaysia passes through Bayan Lepas International Airport (BLIA). This is attributed to Penang’s higher-value industrial output which generally consists of electrical and electronics (E&E) components and products, machinery and equipment, and scientific and measuring equipment.

The recent publication, ‘Malaysia External Trade Statistics by State 2021’, from the Department of Statistics (DOSM) provides a fresh perspective on trade by states. Main differences in this approach compared to the conventional one that is based on trade channels (including airports, seaports and land), are the following: (1) Exports are credited to the state where the final stage of production or manufacturing takes place, and (2) imports are earmarked according to the state of final destination, i.e. where goods are ultimately released from Customs controls (see Department of Statistics, 2021 for more details).

Penang’s trade in goods in 2020 is valued at RM500.4 billion, consisting of RM312.4 billion in exports and RM188.0 billion in imports. Trade surplus stood at RM124.4 billion. Exports increased by 10.0% year-on-year from RM284.0 billion in 2019, while imports rose by 5.7% from RM177.8 billion in 2019. Despite the Covid-19 pandemic and lockdowns affecting the world at differing magnitudes, Penang’s sound economic fundamentals in manufacturing accentuates the state’s solid growth trajectory. In 2020, Penang was one of five states in Malaysia which recorded positive year-on-year exports growth. The others were Pahang, Perak, Melaka and Kelantan.

In terms of major exports by product groups (Table 2), the electronic IC and other E&E products contributed more than half (53.8%) of Penang’s total exports. Growth for these products was at a steady rate of 14.2% for electronic IC, year-on-year, but decreased 2.8% for other E&E products. While there are suggestions that external demand of these products spiked due to lockdowns, and work-from-home and stay-at-home trends, the compounded annual growth rate (CAGR) for the period of 2015-2019 showed that the growth for electronic IC has been pretty consistent. Other product groups in the Top 10 list such as ‘telecommunications equipment, parts and accessories’, ‘piezo – electric crystals & parts’, ‘other valves and tubes, photocells, etc.’, ‘parts and accessories for office machines and automatic data-processing equipment’, and ‘electrical apparatus & parts’ are broadly linked to the E&E industry as well.

Among the product groups that recorded highest year-on-year growth is ‘parts and accessories for office machines and automatic data processing equipment’ which recorded annual growth of 41.8% in 2020, although it had a negative CAGR (2015-2019). Another product group that recorded high annual growth in 2020 was rubber gloves (Table 5 in Appendix); this was driven by the demand for protective equipment during the pandemic. However, this product group contributed only 0.2% to Penang’s total exports.

In terms of major imports by product groups (Table 3), the electronic IC, piezo-electric crystals & parts, and other E&E products, contributed more than half (54.5%) of Penang’s total imports in 2020. Raw beet and cane sugar experienced 89.0% annual increase in imports in 2020, but this product group only contributed 0.6% of Penang’s total imports (Table 5 in Appendix).

Penang’s top trading partners in 2020 are China, the United States of America (USA), Singapore, Taiwan, Hong Kong, Japan, Thailand, South Korea, Germany and Vietnam (Figure 1). These 10 trading partners represent about 87.0% of Penang’s total trade value. Major players in Penang trade are either in semiconductor and E&E or are major trade hubs; this is in line with the economic and industrial output structure of Penang. Import partners’ data also generally reflect the production networks producing components, equipment and machinery for further processes in Penang, and this is reflected again in the export partners’ data (Figure 1). South Korea recorded in 2020 the highest import growth from Penang of 34.4%, while the United Arab Emirates recorded the largest annual import decrease from Penang of 48.6% (see Table 7 in Appendix).

1. There is a need to look beyond headline external trade data, and appreciate deeper and more important details in Penang’s trade and economic structure. It is encouraging to note that DOSM’s recent report takes into account the demand and supply from the state of origin rather than products passing the trade channels of the different states. Further information is also found: on capital or consumption goods; value-added of different industries (available from Economic Census); and share of income to employees. This also suggests that industrial upgrading of promoted industries in the state should be agglomerated as input by policymakers in order to plan, monitor and evaluate strategies and actions in the state’s economic development. A case in point concerning the need to look beyond headline figures is observed in Chew, Gulam Hassan and Ruiz Estrada (2020) where the calculations for domestic value-added share of exports for computers, etc., showed that Malaysia (and another country) had the lowest share of domestic value-added (period of calculation: 2005-2015).

2. Penang’s external trade performance shows the need to upgrade the state’s infrastructure and the connectivity of its major trade channels, especially the BLIA and North Butterworth Container Terminal (NBCT). Notwithstanding contentions against upgrading the passenger terminal at BLIA due to the ongoing travel restrictions and pandemic, efforts should be intensified to upgrade the BLIA cargo area and increase the direct connectivity of cargo or cargo+passenger, especially with the major trading partners listed earlier. This, in turn, would increase efficiency and lower costs to businesses. A recent announcement by DHL Express (see press release by DHL Express, 17 May 2021) that flights will be dedicated to Penang five times a week demonstrates the significant volume generated by Penang. Meanwhile, the gazettement of NBCT as a Free Commercial Zone (FCZ) will increase the dynamics and connectivity of the seaport. In April 2021, Penang Port received its first transhipment at NBCT (Lo, 2021).

3. Penang should take further advantage of its current economic structure to expand its trade in services. Whilst Malaysia has consistently recorded trade surplus in trade in goods, the situation is different for trade in services where Malaysia maintains a deficit. In 2020, Malaysia’s trade in services deficit widened to RM47.4 billion (Department of Statistics, 2021). Based on Penang’s comparative advantage, greater efforts can be undertaken to drive exports in services especially in areas such as other business services (which includes research and development services, professional and management consulting services, technical, trade-related and other business services), and telecommunications, computer and information services.

In addition, e-commerce and digital trade promotion and ecosystem should be strengthened, taking advantage of the pandemic situation. This is in line with World Trade Organisation ambitions (2020), and should take place in several areas, such as improving delivery services and advancing tele-health services.

4. Finally, given the steadily increasing volume of trade in Penang, use of technology and digitalisation in logistics and warehousing should be enhanced. As some industrial giants globally adopt robotics and sensors in their warehouses, Penang’s logistics sector should also promote greater automation and move towards smarter warehousing and logistics technology.