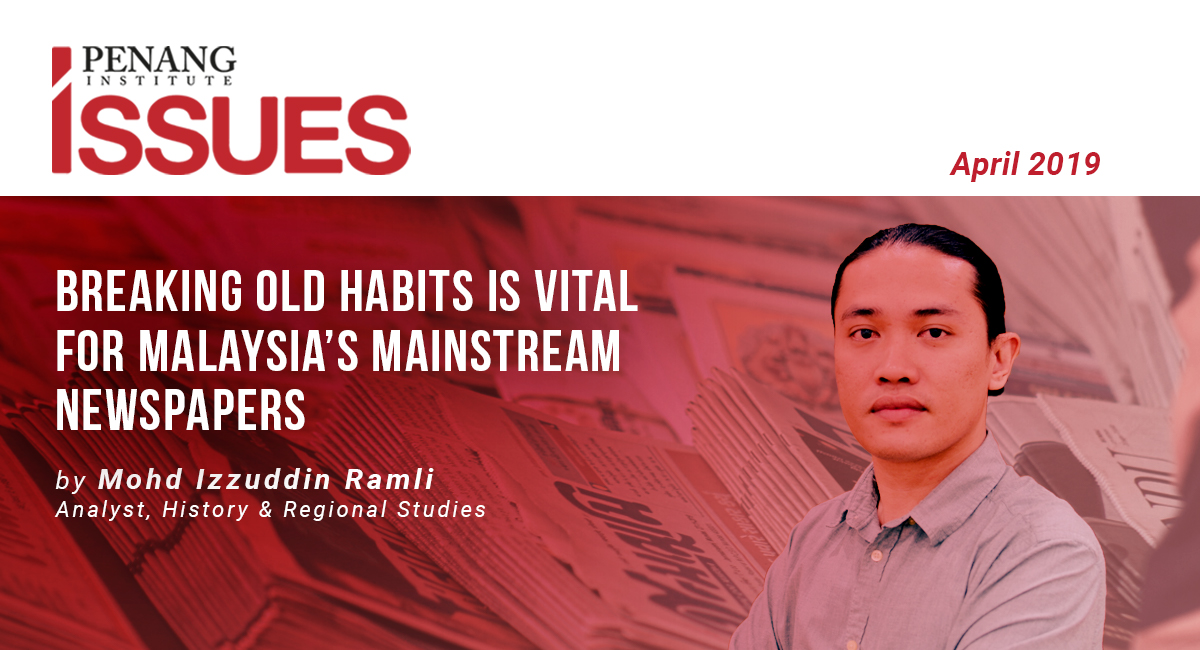 Journalism, particularly newspapers, has always been an integral part of a functioning democracy. It represents the voices of diverse segments of society, and checks the government of the day through conventional (newspapers and periodicals) and alternative (online digital platforms) media. On the flip side, it can also function as a propaganda and hegemonic tool for the powers that be.

Malaya had its ﬁrst journalistic publication in 1806; the ﬁrst English newspaper Prince of Wales Island Gazette was published by the British colonial government, and its target audience were primarily colonists and expatriates residing in Malaya. The ﬁrst Malay newspaper Jawi Peranakan was born in late 1876, 61 years after the establishment of the Chinese Monthly Magazine; and between 1876 and 1941, there were at least 200 Malay and English newspapers, magazines and journals published (Lent, 1978).

An important characteristic to note of the vernacular newspapers – both print and digital – was their tendency to concentrate on events and discourses that were signiﬁcant only to their respective communities. For example, by the end of the nineteenth century, the local Chinese began to establish their own newspapers containing mainly news and articles from Mainland China and Hong Kong (Ng Miew Luan & Lee Yuen Beng, 2018).

The divide and rule policy used by the British Empire in Malaya which was aimed at hindering interactions between the three main ethnic communities created what is now known as a plural society, whereby different communities are placed in the same social or cultural space without little overlapping ethnic interests. The country’s journalism equally developed along the same ethnic lines post-independence and looks certain to continue on the same track even after the May 9, 2018 general election.

The role of ethnicity-based journalism is two-fold; disseminating information and connecting people to a wide array of discourses, but equally disallowing social cohesion by heightening ethnic identiﬁcations among the people.

The excessive usage of the ethnic lens, the unlevelled playing ﬁeld, and state control of newspaper publications have over time contributed greatly to the decline in popularity of the country’s mainstream newspapers.

Ownership and Control of Newspapers

Currently, there are 50 newspapers that cater to different ethnic groups. Sixteen are published in English; 13 in Bahasa Malaysia; 19 in Chinese; and two in Tamil. Bahasa Malaysia dailies reach 46.5% of the Malaysian population, followed by English dailies (28.7%), Chinese dailies (24.1%) and Tamil dailies (0.7%) (Fong & Ahmad Ishak, 2013).

Language, however, is not the only dividing factor nor is it the deﬁning element in ethnicity-based newspapers. In many cases, journalism is increasingly shaped by political ideologies. It is heavily concentrated in the hands of institutions and local conglomerates that are aligned to or owned by political parties. Despite the downfall of the Barisan Nasional (BN) government in 2018, as far as business is concerned, local newspapers continue to develop their readership by conﬁguring issues that speak to their traditional readers’ preferences.

Mainstream print media suffered a nosedive in circulation numbers in 2016 when compared to its 2012 ﬁgures. Paid newspapers in both East and West Malaysia from July to December 2017 showed that only 2.1 million copies were distributed, with Malay language newspapers having the highest circulation number of 1.09 million as compared to English and Chinese ones that accounted only 465,000 and 545,000 respectively (Audit Bureau of Circulations, 2017). From January to June 2018, the circulation number for Malay and English newspapers dropped to 1.03 million and 416,801 respectively, whereas Chinese newspapers increased to 631,259 (Audit Bureau of Circulations, 2018).

The culture and practices of Malaysia’s journalism were shaped by the resilient parochial politics of the Umno-dominated BN government over the last six decades until its downfall in the fourteenth general election. Using it as a propaganda tool, the government restricted and at times, controlled publications as well as intimidated political dissidents. In so doing, the ruling coalition controlled various public-listed media companies by having huge shares of ownership.

The long-standing print newspaper Utusan Malaysia – which was founded as Utusan Melayu in 1939 – is yet another Umno-controlled print media group; it holds a 49.77% share (The Edge). Kosmo is owned by the Utusan Group.

Meanwhile, The Star publisher, Star Media Group Bhd. is 43.03% owned by the Malaysian Chinese Association (MCA), another key party of BN. The company serves as the main source of income for the party. For Tamil newspapers, the Nanban was started by the Malaysian Indian Congress (MIC), though it was originally founded by the former president of KIMMA in 1986 (Sani, 2014).

Since they are predominantly owned by political parties, most mainstream newspapers are politically biased in their reporting.

Azizuddin Sani (2014) for instance reported that during the 2013 general election, Berita Harianand Berita Minggu provided the highest coverage of election issues during the campaign period with 1,138 articles. Malay newspapers (except Sinar Harian), and English and Tamil dailies provided high positive coverage (more than 40%) for BN. Among the Malay newspapers, Utusan Malaysia had the highest negative coverage at 48% for the then opposition coalition Pakatan Rakyat, with no negative columns on BN.

In 2013, after Umno suffered its theretofore worst-ever results in the general election, the newspaper published a feature that was deemed highly racist entitled “Apa Lagi Cina Mahu?”, accusing the Chinese of being ungrateful and of trying to overthrow the ruling government. Today, after the 2018 elections, Utusan Malaysia, surprisingly, continues to spew hatred against the new government while still worshipping its old patron.

Earlier in 2005, when then-Umno Youth Chief and Malaysia’s Education Minister Hishammuddin Hussein wielded the keris at the Umno Youth general assembly, an act which he claimed was to motivate the Malays; it was reported by Fong and Ahmad Ishak (2013) that different mainstream newspapers picked up and reported on the issue differently; this reflects the political, economic and ideological boundaries within which journalists operate.

Despite operating within a very restricted space, Sinar Harian, China Press and Sin Chew Daily, on the other hand, embrace a relatively neutral stance, providing a more balanced coverage of both political coalitions. That said, Sin Chew Daily, however, adopts an ethnic lens by advocating education issues, and cultural and religious rights that are aimed at pleasing the Chinese community (Ng Miew Luan & Lee Yuen Beng, 2018). According to its founder, Tiong Hiew King, Sin Chew Daily was established not as a proﬁt-seeking newspaper, but as a social institution to connect the Chinese community with the ruling government.

The close link between politics and business that has always been the nature of Malaysian journalism has directly impacted how the press sets its policies, agendas and the framing of certain news issues. In such a conﬁned environment, views that do not conform with those of the ruling government will certainly not get paid much attention in the media, resulting in their inevitable side-lining in the public arena.

The Emergence of Alternative Media

The internet effectively transformed the way we communicate and seek information, including accessing news on everyday social and political issues. According to Reuter’s Report 2017, 86% of Malaysians used online sources for news (Reuter’s Institute, 2017).

During the post-Reformasi era, the emergence of alternative media, particularly blogs and online news portals, introduced a new dimension to Malaysia’s journalism. It ended the monopolisation of media space by the traditional media’s espousal of agendas by providing a new setting for the public to be involved in discussions, and to proffer opinions and viewpoints on various issues that could now be injected into news pieces.

Malaysiakini and The Malaysian Insider (known as The Malaysian Insight today) are two of the earliest online media platforms established to provide alternative news coverage, and they have played pivotal roles in many of Malaysia’s social and political events. Unlike mainstream newspapers that offer more news prominence to the government and whose readership is mainly ethnicity-based; alternative media on the other hand, caters to a different social spectrum of liberal, urban-based readers.

Operating in a purely market-based environment, Malaysia’s alternative media, as opposed to their mainstream counterparts, enjoy relatively good returns in terms of readership despite having to navigate through various repressive laws, including the Printing Presses and Publications Act, the Sedition Act and the Communications and Multimedia Act.

The Sinking of Utusan Malaysia

Long before the fourteenth general election, Utusan Melayu (M) Bhd. began experiencing ﬁnancial losses as revenue from advertisement and newspaper sales steadily plummeted. In the ﬁrst half of 2016, the group’s net losses increased 17.8% to RM42.54mil on the back of an 11.7% decline in revenue. Similarly, Star Media Group Bhd. saw a 36% year-on-year decline in core net proﬁt (excluding one-off gains) to RM38.1mil, and Media Prima Bhd.’s net proﬁt fell 28% to RM45.16mil (The Edge, 2016).

The Umno-controlled Utusan has, for many decades now, enjoyed state support; schools and varsities were in fact under orders to subscribe to the daily from the former government. However, months after his swearing in as education minister in 2018, Maszlee Malik instructed all institutions and agencies under his ministry to cease their subscription to the Malay daily (Wern Jun, 2018).

For many, the only reason for the falling sales and readership, as well as the daily’s unstable ﬁnancial standing lies in its unfair reporting, racism and religious bigotry (Mustafa, 2018). Spewing bigotry and at times, even defamatory remarks, have only resulted in its further isolation from the wider segments of society, particularly from mature readers.

Utusan is now in dire straits; it was recently challenged with a possible delisting from the stock exchange due to inadequate company ﬁnancials (Marketing Magazine, 2018). So where will Utusan and other mainstream newspapers suffering a similar fate head to now?

Pakatan Harapan’s victory in 2018 has promised much-needed change for the country’s politics and democracy. To keep up with the changing readership demographics amid continual technological advances, many mainstream newspapers have now moved to online news reporting instead. However, given the shifting demographics of Malaysian society as well as its changing political landscape, it is imperative that mainstream newspapers now report news through a more sociological – and not racial – lens.

For media agencies to set themselves free from political influences – and to ensure healthy competition and press freedom – political parties must not be majority shareholders. A lesson to be learned from the last general election is that disgust over the state’s hegemonic influence over mainstream media, and the overt usage of licensing and censorship to favour one side were signiﬁcant factors that led to the BN government’s eventual downfall.

As Malaysia now seeks to mature as a democracy, breaking the old habits of ethnicity-based news reporting by mainstream newspapers is crucial. Ultimately, journalism needs to speak for the people, and not for the government.