The recent call [1] by noted economist KS Jomo to slash the development expenditure (DE) allocated to the Prime Minister’s department and to scrutinize big infrastructure projects such as the East Coast Rail Line (ECRL) is a timely reminder of an issue that has been previously raised by opposition members of parliament. But what has been lacking thus far is a more systematic analysis of the details of the development expenditure, especially under Prime Minister Najib’s tenure as Finance Minister, and specifically, the DE allocated to the Prime Minister’s Department.

Penang Institute in Kuala Lumpur (PI in KL) has produced a report detailing the evolution of the DE in the Federal Budget over the past decade. The highlights of this report include: 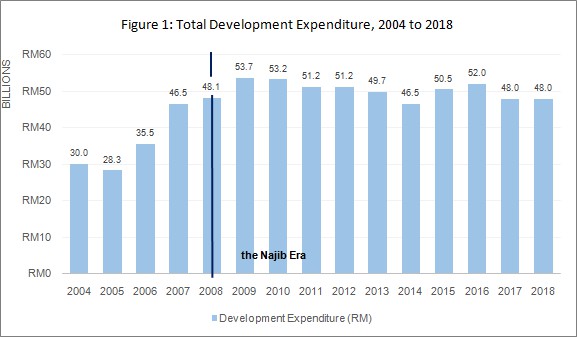 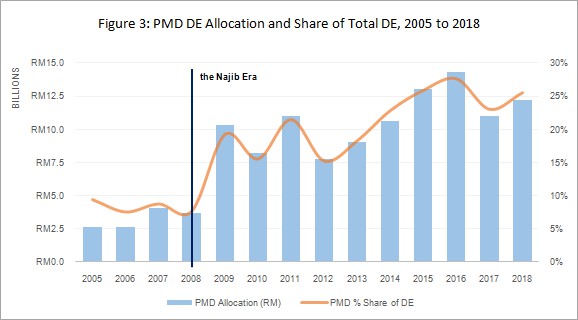 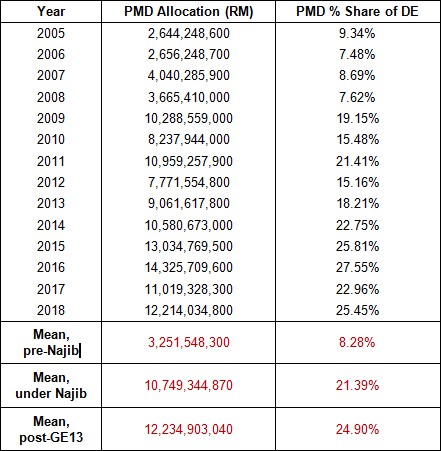 (3) The allocation of a significant proportion of the DE to the PMD is done in an opaque and non-transparent manner. Big amounts of spending are lumped together and classified under very general descriptions such as “Special Projects”without clear definitions as to how these are  to be spent. The absence of clear definitions of spending for these “Special Projects” heightens the risk of potential abuse and corruption. It gives room, for example, to the Prime Minister to allocate a proportion of funds reserved for ‘Special Projects’ to politically connected contractors in BN areas. These funds have been called “slush funds” by the Kluang MP, Liew Chin Tong [2]. From 2010 to 2018, a total of RM43.7 billion of the allocations to PMD DE can be categorized as “slush funds”. They include: 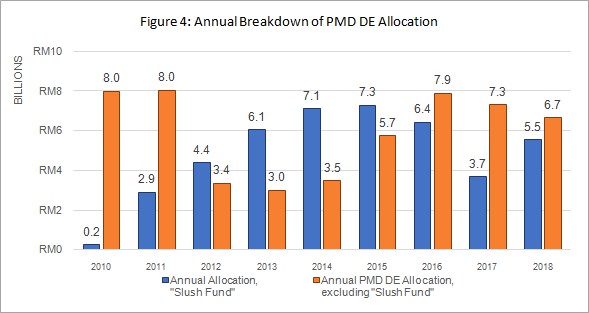 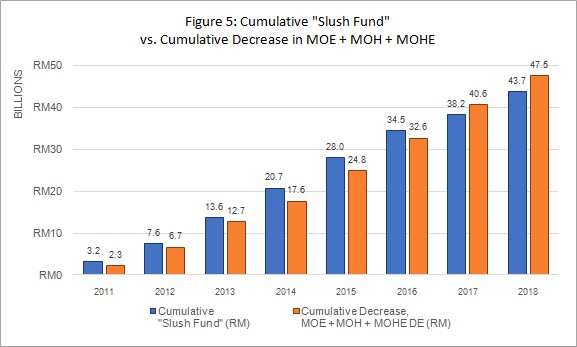 To conclude, this report has shown that both the absolute total, and % allocation, to the DE in the federal budget has decreased during the Najib era. At the same time, the overall allocation to the PMD has increased significantly, by roughly threefold, during this period. Moreover, the DE allocation in the PMD to “slush fund” projects has increased significantly to an average of half of the PMD’s DE. This increase has ‘crowded out’ and reduced the DE allocated to the MOE, MOHE and MOH, resulting in fewer schools, fewer institutions of higher learning such as community colleges and universities and fewer hospitals being built under the Najib era. It is clear from this analysis that the pattern of federal budget allocations must be re-considered and re-prioritized. The amount of DE allocation given to the PMD must be cut significantly, , starting with the “slush funds”.