Media Statement by Dr. Ong Kian Ming, Head of the Penang Institute in Kuala Lumpur on the 13th of March 2018.

With much recent attention on new public transportation projects such as the LRT Line 3, the MRT Lines 2 and 3, the East Coast Rail Line (ECRL) and the KL-Singapore High-Speed Rail (HSR), the oldest rail operator in the country, KTM has been largely ignored even though it provides important connectivity within the Klang Valley and is a major form of inter-city public transportation.

This report by Penang Institute in KL examines in detail the current performance of KTM, the challenges faced as well as the future prospects of the rail operator. In summary, the performance of KTM across all service offerings, with the exception of the ETS, has been declining.

Daily ridership for the KTM Komuter peaked in Q1 2015 at 137,500 passengers. By Q3 2017, it had fallen to 99,033 passengers, translating to a 27.8% decline in a period of 2.5 years (Figure 1 below). The reasons for the fall in daily ridership include (i) A fare hike in December 2015 (ii) Decrease in train frequency due to the Klang Valley Double Track (KDVT) upgrading works (iii) An increase in train derailments and accidents and (iv) increase in competition from MRT Line 1. 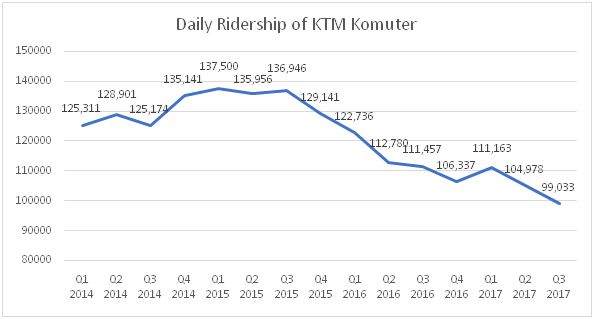 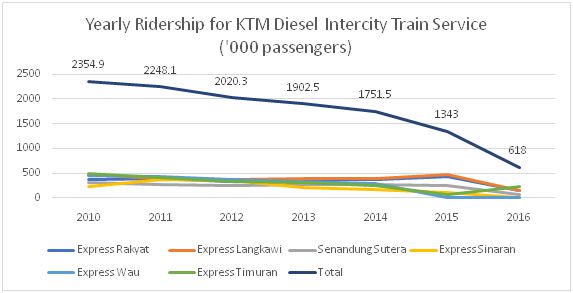 At the same time, yearly ridership for the KTM Intercity services has been steadily decreasing from 2010 to 2016. Going from 2.35 million passengers in 2010 to 618,000 passengers in 2016, there was a 73% drop in ridership over a 7-year period (See Figure 2 above). The reasons for this drop in ridership are (i) the ETS replacing the diesel KTM intercity services in 2015 and 2016 and (ii) the floods in the East Coast in 2015 and the low frequency of intercity trains thereafter. 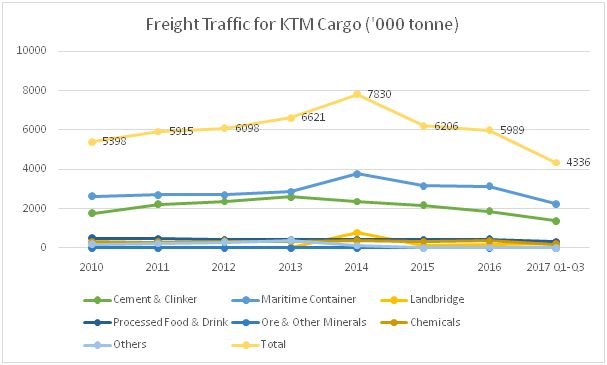 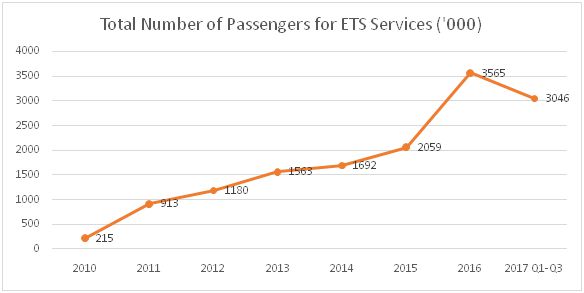 The only bright spot in KTM’s performance is the ETS. Figure 3 above shows the total number of the ETS passengers since its introduction in 2010 until the third quarter in 2017. Ridership increased by nearly tenfold, from 215,000 in 2010 to 2.06 million passengers in 2015, with a further increase to 3.57 million passengers in 2016, the same year that ETS services were extended to Padang Besar via Butterworth in the north and to Gemas via Seremban in the south. The rising popularity of the ETS is explained by its reputation for being safe and relatively reliable, as well as affordability of service and the better connectivity of KL Sentral as an integrated public transportation hub (compared to flying or taking the bus). Ridership on the ETS should experience another significant jump after the completion of the electrification and double tracking project from Gemas to JB in 2022, assuming that there are no delays. 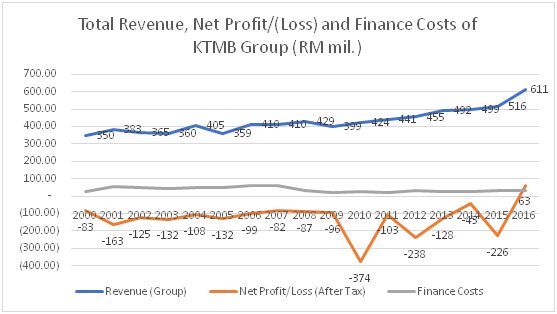 But even the ETS was not able to significantly improve KTM’s financial performance. Based on figures from KTM’s annual report, accumulated losses from 2000 to 2015 totalled RM1.87 billion. Only in 2016 did KTMB manage to achieve a profit of RM63.22 million, due largely to a one-off asset disposal in a property joint venture. Without this disposal, KTM would have made a loss of RM189.2 million in 2016.

KTM would have incurred even larger losses if not for the non-repayment of soft loans totalling RM880 million provided by the Malaysian government. KTM has asked for the start of repayment of these loans to be postponed to 2021 but the cabinet has yet to make a decision on KTM’s request. Without the government’s support and backing, KTM would not be able to survive as a going concern, and this has been acknowledged in its most recent Audited Accounts.

Unfortunately, the future prospects for KTM’s other services do not seem so bright. The Railway Network Access Agreement (RNAA) will see the ownership of all of KTM’s physical assets such as the stations, the trains, the track and staff quarters being transferred to the Railway Asset Corporation (RAC). The RNAA will introduce more competition for KTM, especially in the cargo sector which currently makes up 40% of KTM’s total revenues. At the same time, it is uncertain if the cost savings for KTM (derived from not having to pay for the maintenance of the tracks and stations) will make up for the increase in costs resulting from KTM having to pay RAC access charges for the use of the trains, the track and the stations. It is also uncertain if the debt totalling RM880 million incurred by KTM to procure 80 sets of Electric Multiple Unit (EMU) trains will also be transferred to the RAC.

The Tebrau Shuttle which takes passengers from JB Sentral to Woodlands in Singapore in only 5 minutes is due to cease operations within six months of the commencement of operations of another rapid transit system, namely the Singapore-JB Rapid Transit System (RTS). The RTS is expected to be completed by 2024 and will be operated by a joint venture between Prasarana Malaysia and SMRT Singapore.  As a result, KTM will lose its revenue stream from this service. KTM’s commuter services in the Klang Valley will also experience greater competition when the LRT service is extended all the way to Klang as part of the LRT 3 line, and when the MRT Sungai Buloh-Serdang-Putrajaya line begins its operations in 2022. KTM’s intercity services from KL to JB will also face competition from the High-Speed Rail if and when it is completed in 2026.

A serious rethink of the business model of KTM is needed if it is going to survive as a going concern moving forward. The government, led by the Ministry of Transportation and the Ministry of Finance, needs to rethink the entire basis of the separation between rail asset ownership by the RAC and rail operations by KTM. Several years ago, a similar model had been tested out with railway administration in the United Kingdom, with poor outcomes. The possibility of recombining the asset ownership and operations should be studied and evaluated carefully so as to allow KTM to monetize some of the physical assets such as land and stations to cover for its debt and operational losses. These assets could also be used to increase non-fare revenue in other areas such as retail and advertising. KTM stations are one of the few train stations in the world where passenger foot traffic is not monetized via retail outlets and activities as well as via advertising opportunities. At the same time, KTM needs to undertake serious cost cutting measures including eradicating corruption, improving transparency and minimizing bad business decisions such as the RM85 million project given to Hopetech Sdn Bhd to install an Automatic Fare Collection system that was later abandoned. Finally, KTM needs to be better integrated with other forms of public transportation in the Klang Valley especially in terms of seamless single ticket usage with the LRT, MRT and Rapid KL buses. Without such a serious rethink, it is likely that KTM will remain financially and operationally inefficient in years to come, and the amount of money which the government must pour into KTM will only continue to grow.

(The full report can be downloaded from the Penang Institute website: www.penanginstitute.org)