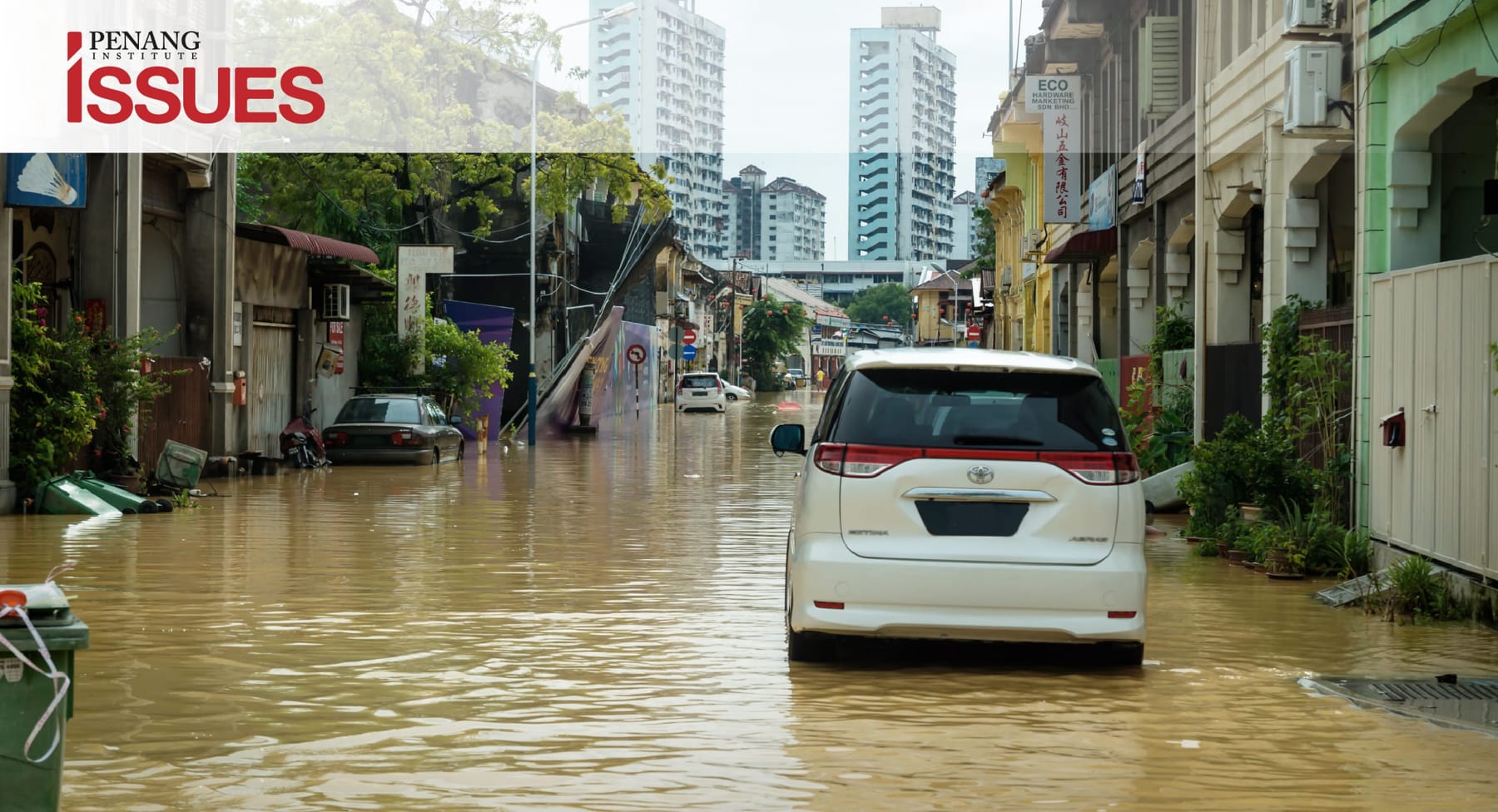 Floods are one of the most regular natural disasters affecting Malaysia. Every year, states in the East Coast are inundated during the monsoon season. In December 2021, torrential downpours from tropical cyclone Typhoon Rai throughout the Peninsula affected eight states across the country, bringing some of the worst floods to hit the country in decades (Hassan, 2021). Unusually heavy rainfall which started on 17 December 2021 has since affected more than 125,000 people, killed at least 54 people, displaced thousands, and left emergency services strained (CNN, 2022). The country is estimated to have suffered losses between RM5.3billion and RM6.5billion from damages to residences, business premises, vehicles, public assets and infrastructure, the manufacturing industry, and the agriculture sector (Lim, 2022).

Flooding issues have become an annual occurrence in Penang, especially in low-lying areas. Despite the various improvements made to drainage systems, and maintenance work carried out by the Drainage and Irrigation Department (DID) on hydrology stations, flood warning siren stations, pump houses, and tidal control gates, Penang is still vulnerable to floods (Liew, 2021). In view of the constant threat, the state plans to set up a Natural Disaster Management Unit to manage natural calamities and plan early interventions (Trisha, 2022). Two retention ponds near Solok Van Praagh in Jelutong have been successfully built as the first phase of flood mitigation efforts in that area, along with the widening of internal drainage and building of box culverts. The second phase involves building an underground retention pond (Moroter, 2021).

Urban areas are more prone to flooding because streets and buildings are impervious, hence rainwater cannot seep into the ground but instead flow to lower-lying areas. More drastic measures are needed as long-term solutions, since existing infrastructure are aging and built for the climate of the past (Crownhart, 2021). It is imperative to build more resilient systems instead of resorting to Band-Aid solutions.

Singapore experiences tropical weather conditions similar to those in Penang, but has far fewer incidents of floods annually despite having substantial built and impervious areas. PUB, Singapore’s national water agency, adopts a catchment-wide approach which introduces flexibility and adaptability into the drainage system. This solution balances water supply and flood risks. The ‘Source-Pathway-Receptor’ system places measures at every point where stormwater may flow and gather (NCCS Singapore, 2021).

Source is where stormwater runoff is generated. When it rains, rainwater that is not absorbed by the soil travels over surfaces as runoff before flowing into drains. In order not to overwhelm the drains (pathways), the rate at which water flows into pathways are slowed down by retention ponds and detention tanks. Developers of new projects since January 2014 are required to build on-site detention tanks, green roofs, rain gardens, or retention ponds to slow down the flow of stormwater into the public drainage system. Green roofs or rooftop vegetation capture rainwater, allowing evaporation to take place and thus reduce the amount of run-off entering drainage systems. Alternatively, rain gardens help with filtering the water that flows into the drainage systems. This is similar to China’s ‘sponge cities’ concept which incorporates interconnected greenways and waterways, open green spaces, green roofs, porous design interventions and drainage systems (Gill, 2021).

Pathways are where stormwater travels to a centralised detention tank or other water bodies through drains and canals. These pathways are widened and deepened to quickly channel stormwater away from developments into reservoirs or detention tanks. Diversion canals are also constructed to divert runoffs while centralised detention tanks are built along the pathways. In doing so, the pathways are able to cope with more intense storms. Singapore currently has an extensive 8,000km network of drains, rivers, and canals. Stormwater which travels through these networks are collected and stored in detention tanks. Singapore currently has 2 main detention tanks, the Stamford Detention Tank and the Opera Estate Pumping Station, which have a capacity of 38,000 cubic meters and 15,000 cubic meters respectively (Ng, 2021).

Receptors are areas where floodwaters may propagate to and affect infrastructure such as buildings and basements. In order to protect these areas, measures such as raising minimum platform and crest levels are taken. Flood barriers are installed to protect buildings from floods. Entrances of buildings and train stations are also raised to prevent storm water from flowing into them.

Singapore’s Marina Barrage is a dam built across the 350-metre wide Marina Channel which keeps out seawater. It is the country’s largest and most urbanised catchment, spanning 10,000 hectares. The barrage serves as a source of water supply, flood control, and lifestyle attraction venue. During heavy rains, a series of nine crest gates at the dam are activated to release excess stormwater into the sea when the tide is low. When the tide is high, giant pumps come into play to drain excess stormwater to sea. This alleviates flooding in low-lying areas in the city (PUB, 2018).

On top of these structural measures, the public is also provided with heavy rain alerts and updates on water levels in the nation’s drains and canals through various platforms so that they may monitor potential flash floods and take pre-emptive measures (PUB, 2019). While these hard engineering methods are costly and requires months if not years to build, they are effective and can solve the flooding issues in Penang in the long run.

Penang can adopt the ‘Source-Pathway-Receptor’ system by building more retention ponds and detention tanks at inland and low-lying densely populated areas. On the island, these measures are urgently needed due to the risk from rise in sea-level and rapid developments. These measures ideally should be taken at areas prone to flooding on the island which include (but are not limited to) Jalan P. Ramlee, Jalan Perak, Jalan Thean Teik, Jalan Masjid Negeri, Jalan Dato Keramat, Jalan Macalister, and areas in Bayan Lepas (Penang International Airport), George Town (Jalan Pintal Tali, Jalan Sungai Ujong, Lebuh Cintra, Lebuh McNair, Lebuh Katz) and Jelutong. The retention ponds at Solok Van Praagh, Bayan Lepas, and the Dondang Flood Retention Pond located in Air Itam are effective to a certain extent. Apart from deepening and widening drains, rivers, and canals, building diversion canals at flood-prone areas would slow down and divert stormwaters to help ease the load off Sungai Air Hitam, Sungai Dondang, and Sungai Pinang. Developers of new developments should also be required to build green roofs, rain gardens, and where possible, on-site detention tanks.

The Netherlands is known for its stellar flood management strategies despite its low elevation and flat topography; as much as a third of the country is below sea level. In 2007, the Dutch Government introduced the Room for the River Programme to manage higher water levels encompassing four rivers, namely the Rhine, the Meuse, the Waal, and the Ijssel. These rivers together form the river delta connecting the North Sea to the vast German and Central European hinterland. The programme aims to lower the levels of flood plains, create water buffers, relocate dykes, increase the depth of side channels, and construct flood bypasses. Measures are taken at more than 30 locations to allow river space to flood safely. These measures are also designed to improve the quality of the immediate surroundings.

The goal of the Room for the River approach is to restore the rivers’ natural flood plain in order to defend surrounding places when water levels rise during heavy rainfalls. With heavier and more frequent rainfalls, rivers must discharge increasing amounts of water to the sea but the rivers are confined between higher dykes and hence are getting less room. To protect areas against flooding, rivers are given more room by relocating dykes further inland, lowering and broadening floodplains to allow the main river more room to discharge water, lowering river groynes so that water can flow faster, and deepening summer beds. A temporary water storage area is put to use whenever storm surge barriers are closed during high river discharges. In doing all this, the Dutch Government ensures the safety of four million people in the Dutch delta and simultaneously benefits the spatial quality of the river landscape (Room for the River, 2012). These projects are typically expensive and often require sacrifices; people whose homes are located in flood zones are displaced and formerly productive land is fallowed or repurposed. In return, natural floodplains are restored to serve as sponges during floods (Iovenko, 2018).

Another flood management technique commonly practiced in the Netherlands and several other European countries, and in the United States, is beach nourishment or replenishment. Through this method, sand, gravel, or small pebbles are spread over the beach where erosion occurs to compensate shore erosion which then protects the area against storm surge. The Zandmotor, or Sand Engine is a 1-kilometer-long, hook-shaped peninsula that was built in 2011 along a stretch of coastline at Ter Heijde in South Holland. The natural forces of wind, waves, and tides then distribute the sand along the coast over the years and naturally replenish nearby beaches, preventing the need for repetitive beach nourishment which saves cost and reduces repeated ecological disruptions caused by replenishment (Iovenko, 2018). However, sourcing for sufficient quantities of good quality sand can be challenging. Nevertheless, this flexible and fast coastal management system is more economical compared to hard constructions. Apart from flood and erosion mitigation, beach nourishment is also beneficial for coastal tourism, recreation activities, and the preservation of coastal habitats (Climate-ADAPT, 2016).

Applying these soft water engineering methods in Penang is possible, albeit at a much smaller scale compared to The Netherlands. Beach replenishment and embankment measures are needed at the Eastern and Southern coastlines of the island to deal with storm hazards and sea-level rise (Gao et. al., 2021). Making room for floodplains at the main rivers running through Penang such as Sungai Pinang, Sungai Air Hitam, and Sungai Perai would help ease flooding issues but must be done strategically and with knowledge about where the river water swells the fastest during storms. Simultaneously, it has to be done along locations of the rivers where displacements are minimal.

Table 1: List of flood management solutions adopted by Singapore and The Netherlands

1. Multi-pronged flood mitigation efforts
Penang needs to employ both hard and soft engineering methods to deal with frequent floods. Every catchment point needs to be addressed, as is done with the ‘Source-Pathway-Receptor’ system. The measures should be tailored to the locations and take into account the availability of space, soil conditions, surrounding architecture and infrastructure, and the needs of the local community. Efficient urban planning must include flood mitigation efforts.

2. Requirement for new developments
Developers of new developments should be required to construct flood-prevention structures such as on-site retention ponds, detention tanks, rain gardens, and green roofs. This would spread flood mitigation efforts across Penang and reduce the risk of flooding where new developments have increased impervious areas. In addition, this would also instil more responsible and sustainable development projects.

3. Involvement of national and local stakeholders
Municipal, regional and national stakeholders, water specialists and engineers need to be involved in the planning and construction of flood mitigation measures. In successfully implementing flood mitigation projects, there should be full involvement between The Ministry of Works, Department of Environment (Ministry of Environment and Water), Drainage and Irrigation Department (DID), National Water Services Commission (SPAN), and Municipal Councils (MBPP and MBSP). Despite the involvement of the multiple parties, implementation of the projects must be done swiftly. It is also important to have ground-level expertise, and the ability to finely tune adjustments in accordance with local needs.

4. Education to the public
Public awareness of the consequences of clogged rainwater pathways (drains, culverts, curb drainage openings, canals, and rivers) needs to be raised. Irresponsible littering and inappropriate disposal of oils and chemicals into these pathways can cause flash floods that could be avoided with some civic conscience. Heavier fines should be imposed on errant litterbugs.