The implementation of the Good and Services Tax, a higher BR1M and income tax cuts are some of the key elements in the Budget 2015.

Following the Budget 2015 to widen the scope of items that will not be subject to GST, the increased in the limit of electricity consumption not subject to GST and the exclusion of retail sale of RON95 petrol, diesel and LPG, we re-computed our analysis and believe that:

1) After taking into account BR1M, the Budget 2015 estimated that the net revenue collection from GST will amount to RM 690 million per annum.

2) However, if this amount is estimated before the incidence of GST fraud, we believe that the practical amount might fall short of this realistically.

3) Besides, as the enforcement and monitoring costs might not be included, the net revenue raised might be even less.

4) Given that the expected fiscal deficit is 3.5% of GDP in 2014, the actual net revenue raised from GST might only contribute marginally to the aim of having a balanced budget.

5) Despite setting essential items like basic food, public transportation, education, healthcare, higher limit of electricity consumption, petrol, diesel and LPG as exempt or zero rated items, we find that GST itself remains a regressive tax (i.e. the low and middle income households will bear a higher tax burden than the higher income households).

6) This finding is consistent with the norm in international practice (e.g. the US tax administrator’s definition of regressive tax) and with international findings [e.g. “Does Australia Have a Good Income Tax System?” published in the International Business & Economics Research Journal (May 2013)].

8) Our conclusion that GST is a regressive tax is robust as it was undertaken using:
a. Bank Negara’s estimates of income/expenditure
b. The latest Household Expenditure Survey 2009/2010 from the Department of Statistics
c. The stipulation that essential items like basic food, public transportation, education and healthcare are exempt or zero rated items

The average Malaysian household pays RM 70 per month or 1.9% of income as GST

9) Our research shows that the average Malaysian household is expected to pay RM 70 per month or 1.9% of their income as GST.

10) We find that a higher GST burden (as a percentage of income) will fall on households in these categories:
a. Low and middle income
b. Single person household
c. Young (less than 24 years old)
d. Bumiputera led households
e. Clerical workers, skilled agricultural and fishery workers
f. Households residing in Peninsular Malaysia

11) In the Budget 2015, a higher BR1M and income tax cuts are introduced at the same time as GST.

13) According to the Household Income Survey 2012, the average household income in Malaysia is RM 5,000 per month (RM 60,000 per annum). Therefore, we believe that the combined effect will result in the average Malaysian household having less cash to spend. 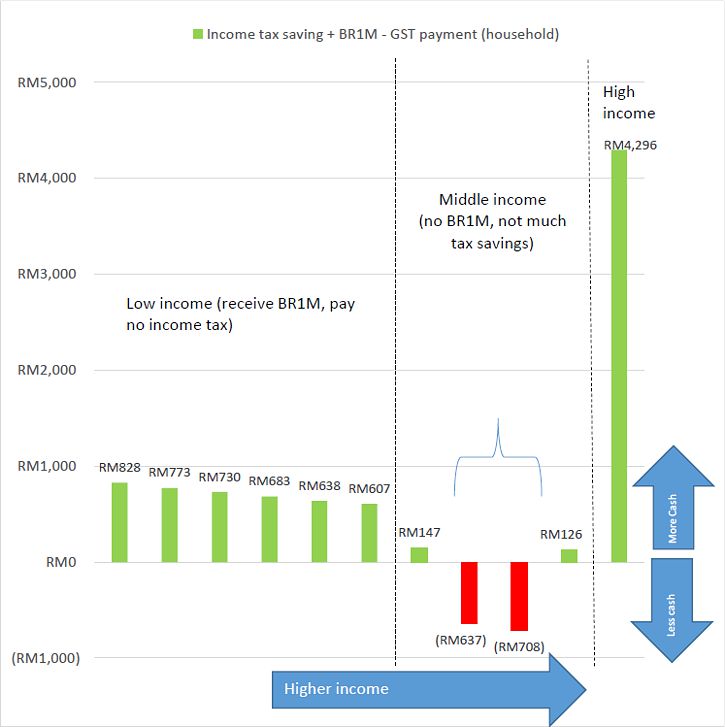 For more information on our research and on our interactive spreadsheet detailing the impact on different households, visit: https://www.penanginstitute.org/gst/