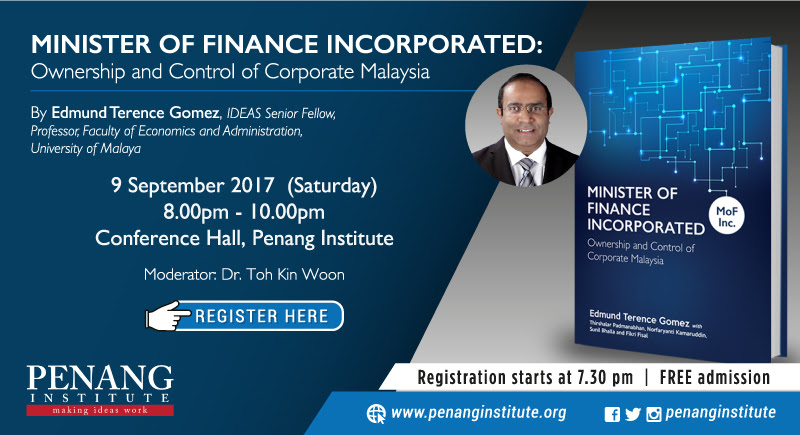 Penang Institute, the public policy think tank of the Penang state government is proud to host to a lecture entitled “Minister of Finance Incorporated : Ownership & Control of Corporate Malaysia” by Prof. Dr. Edmund Terence Gomez which is scheduled as follow:

In this study of Malaysia’s new political economy, Prof. Dr. Edmund Terence Gomez unwraps decades of political involvement in Malaysia’s corporate sector, focusing on the omnipresent control of government-linked investment companies (GLICs) through a complex system of power which rests at the apex body that is Minister of Finance Incorporated (MoF Inc.).

Malaysia possesses a unique history of government-business relationships, spanning from a piece of legislation that permitted the Executive to own companies since 1957. The nexus of a variety of ownership methods and directorship ties, as well as bailouts, have ultimately led to the accumulation of corporate wealth in the hands of a mere seven GLICs. A series of events that includes Tun Mahathir Mohamad’s unprecedented move to concurrently take on the role of Prime Minister and Minister of Finance has shifted enormous corporate power to the office of the Executive.

Prof. Dr. Edmund Terence Gomez is a Professor of Political Economy at the University of Malaya. He previously served as Research Coordinator at the United Nations Research Institute for Social Development (UNRISD), in Geneva, Switzerland. Gomez specializes in state-market relations and the linkages between ethnicity, politics and business development. He is a Senior Fellow at the Institute for Democracy and Economic Affairs (IDEAS) and has held appointments at the Universities of Leeds (UK), Murdoch (Australia), Kobe (Japan) and Michigan (Ann Arbor) and California (San Diego) (USA).

Please register your interest here. Please feel free to circulate this invitation to your family and friends.