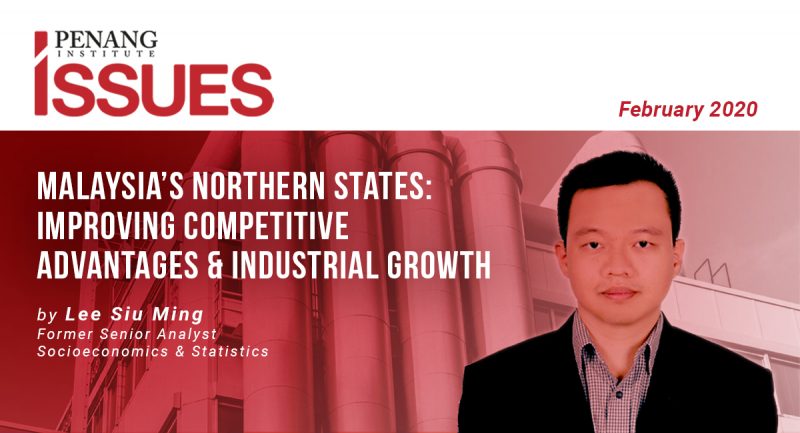 This brief discusses the comparative and competitive advantages for industrial growth within the concept of
‘prosper thy neighbour’ for the four states in northern Malaysia–Kedah, Penang, Perak and Perlis–and offers a value proposition for shared growth. In summary, this brief proposes the following modes of action:

Much greater emphasis should be placed on the role of competitive advantage as a predictor of the economic prosperity of not only firms, but also nations (Gupta, 2015). This refers to the “creation” of some natural or policy-induced superiority which reduces costs for all home sectors. Porter (1990) exemplified the use of case-study evidence to identify the factors of competitive advantage which encourage a nation’s firms to achieve high world market shares in their industries. Gupta (2015) noted that a nation’s prosperity is not “inherited” and does not necessarily depend on factor endowment but rather, it is “created” by the nation’s firms that are successful in the world markets. This would, among others, depend on the capacity of the nation’s industry to innovate and upgrade. Success can be measured in terms of substantial and sustained exports and/or foreign investment.

To ascertain economic growth, it is critical that each state formulate and implement various economic growth strategies (Idris and Yussof, 2009). As Malaysia is an export-oriented open economy, states emphasize the manufacturing sector as an important contributor to the state’s economy[1]. This brief examines manufacturing activities and existing industries in the four states in northern Malaysia (Kedah, Penang, Perak, and Perlis), and provides a descriptive explanation of the comparative and competitive advantages of each state based on the limited data available. In Tun Dr. Mahathir Mohamad’s speech at the World Bank’s annual meeting in Hong Kong in 1997, he defined the term ‘prosper thy neighbour’ as prosperity together with one’s neighbour. A country benefits from an expanded market for goods, and wealth-creating investment opportunities, even as jobs and wealth are created for its neighbours. The statement also provides motivation for this brief in examining the ‘neighbours’ of the northern region states. In our discussion, three key issues are raised, namely: (1) Potential opportunities for synergies in the current and related industries; (2) Trade and investment in the rise of the US-China trade war; and (3) The evolving role of the Northern Corridor Implementation Authority (NCIA).

Framework in the discussion of comparative and competitive advantages

The comparative and competitive advantages in this article are discussed based on the framework adapted from Gupta (2015). In terms of comparative advantage, Gupta (2015) lists the synthesis of factors as follows:
i. Scale economies, supporting industries, and technology
ii. Quantity and quality of physical and human resources
iii. Trade enhancing national policies and international policies iv. Demand or market size

Meanwhile, the competitive advantages adapted from Porter (1990) and Gupta (2015) are as follows:
i. Competencies or resources to benefit from comparative advantage and convert it to competitive advantage
ii. Innovation strategies related to demand factors and product differentiation
iii. Innovation strategies related to supply factors and supporting industries
iv. Business environment, government policies, and supporting industries

Since this brief discusses the comparative and competitive advantages of the four states in relation to manufacturing activities and its existing industries in the context of some prevailing issues, the comparative and competitive advantages described here may not be all-encompassing, especially when primary and tertiary sectors of the economy are not within the scope of the discussion.

A Note on Competitive Advantages and Industrial Growth

1. Tap into and create synergies between current and their related industries

One interesting segment to note is electronics, which has become a significant product in manufacturing in these four states as well (Athukorala and Narayanan, 2017), but this brief notes that different states are engaged in fairly different product segments and different parts of the value chain. The states are and should continue to carve a niche in different electronics product segment and value chain to ensure that all states are able to benefit from the growth of the electronics manufacturing sector. For example, while Penang has had industrial experience in the E&E sector for more than 45 years[2], the presence of foundries is particularly small. This gap, however, is observed to be filled in Kulim Hi-Tech Park. Meanwhile, Perlis is attracting investment in the solar energy (PV) sector. InvestPerak (undated) described the state’s proximity to electronics manufacturing hubs like Klang Valley and Penang as a proposition to investors, with MNCs and home-grown companies such as Unisem and Carsem having operated in Perak for decades.

Malaysia has been a global leader in the resource-based industries (such as in the manufacturing of rubber products, especially rubber medical devices[3], and palm oil products). There is continued space for growth and opportunities for higher value activities. The high sector multiplier of 2.6 times (calculation by MAVCOM, 2017) for rubber products manufacturing also clearly shows Malaysia’s comparative advantage in this sector. One way to escape the dependency on commodity is to address the downstream constraints of these value-added resource products, which are mainly exported (Farfan, 2005). Ali and Ahmad (2009) advocated that the expansion of economic sectors such as the manufacturing sector is a way forward to increase income. This includes policies that encourage high-tech agriculture-based industries and that are targeted at new industries or business.

In the latest announcement of Kedah Rubber City, the project will focus on innovative, high value and specialised latex and rubber products, precision-engineered rubber products and ‘green’ rubber products. All this will also contribute to the demand to use Penang Port for external trade. Its first phase consists of 500 acres, jointly developed by the Northern Corridor Implementation Authority, Kedah’s state government and the Malaysian Rubber Board. Athurokala and Narayanan (2017) reported that the full scale of the project will cover 1,500 acres of land area. With the government’s support and its strategic location near the upstream raw rubber (local and imported from Thailand), downstream manufacturing companies may consider investing or expanding in Kedah Rubber City, and benefit from its proximity to Penang Port. In Perak, Kossan Rubber Industries Bhd, the world’s third largest producer of rubber gloves, has announced the construction of an integrated plant in Bidor, Perak with an investment of RM1.5 billion. There are also additional plans to subdivide the land for their suppliers and build an industry-relevant ecosystem in the same project.

While Perlis contributes the lowest share to the national GDP among the four states, Andriesse and van Westen (2009) noted that the state has a rather diversified economy with services as its main sector along with some manufacturing, including those by foreign investors, as compared to Satun, its neighbour at the Thai border, which is limited to a small services sector and some processing of primary products, notably a large tuna canning plant. Nevertheless, there are initiatives being undertaken to enhance the economic activities in Perlis (as described in this section and the following sub-sections).

Furthermore, Athukorala and Narayanan (2017) highlighted that one major limitation from NCIA initiatives so far concerns the rural-urban divide – especially targeting the improvement of people living in the agriculture hinterland in the states of Kedah, Perlis and Perak. Given that the agricultural sector contributions to GDP of Kedah, Perak, and Perlis is more than 10% each, the manufacturing of agricultural resource-based outputs can be expanded to take advantage of this.

Athukorala and Narayanan (2017) advocated for trade in high-value foods, for example, processed form of fruits and vegetables, poultry, fish, and dairy products. In 2017, the Ministry of Agriculture and Agro-based Industries approved RM1 million to the Perlis state government for the management of harumanis farming. An additional allocation for research purposes to enhance the quality of mangoes may be considered. More initiatives can be undertaken to move into the value-added manufacturing of agricultural and processed food where demand for these products is less cyclical. The advantage of being in the Indonesia-Malaysia-Thailand Golden Triangle (IMT-GT) has constantly been raised but there can be more benefits to be tapped in the halal and food industry by the four states, and a natural extension to the current economic activities here will be the processing of agricultural outputs.

The volume of trade (both import and export) shows an increase (in value terms) in the past five years for the North Butterworth Container Terminal (NBCT). In the past five years, exports from NBCT increased from RM38 billion in 2014 to RM51 billion in 2018, an increase (2014-2018) of 7.6% (Compound Annual Growth Rate, CAGR), while imports also recorded a CAGR of 8.4%, reaching RM40 billion in 2018. It is worth noting that about 15-20% of the volume comes from Thailand, and a large volume of goods is from the northern states in Malaysia other than Penang.

In terms of air freight, the value of the air freight trade at Bayan Lepas International Airport is the highest in Malaysia (exceeding the airfreight trade value of KLIA) reflective of export volume from the E&E sector in Penang and the northern states. In the past five years, exports from Bayan Lepas International Airport increased from RM118 billion in 2014 to RM233 billion in 2018, an increase of
15.5% (CAGR), while imports also recorded a CAGR of 6.0%, reaching RM135 billion in 2018.

At the Malaysia-Thailand border, Bukit Kayu Hitam shows continued trade growth. Exports grew by 10.3% (CAGR) between 2014 and 2018, and stood at RM20 billion in 2018. Imports showed an increase of 9.4% (CAGR) in the same period, and stood at RM17 billion in 2018. It is also encouraging to note that Malaysia and Thailand will pursue a single-window system to facilitate the clearance of goods at the border (Malay Mail, 2019). With the available air, sea and land infrastructure, and the planned future infrastructure[4], there is capacity to handle increased manufacturing output in the northern region. This can be done through an increase in high-value, technology-intensive manufacturing activities, also for the purpose of capturing long-term economies of scale.

In discussing current and related industries to capitalize and tap on, future industrial growth actions planned to be undertaken in the four states, and the infrastructure channels for trade in this sub-section, it is imperative to note that the independent variables of foreign direct investment (FDI), and FDI growth do not result in significant GDP growth by themselves. They have to be accompanied by improvement in productivity and competitiveness, investment in human resources, and upgrading of technological capabilities (Hooi, 2008). Labour productivity in the four states showed an increasing trend in 2015 as compared to 2010, but only Penang’s labour productivity exceeded the national labour productivity[5].

2. Trade and investment in the rise of US-China trade war

In view of the escalating United States-China trade war, This sub-section discusses the United States-China trade war’s potential threats and opportunities for the four states. The trade war is a key concern for many economies around the world. Malaysia will not be spared totally from a possible full-scale global trade war (if it happens) given the country’s dependency on external trade (Affin Hwang Investment Bank, 2018). The northern states of Malaysia may face challenges in some of the key industries that are most exposed to external trade, and have previously