Media Statement by Dr. Ong Kian Ming, General Manager of Penang Institute in KL, on the 21st of December 2016

Note: Some newspaper reports on my statements during a PTPTN forum on Monday, 19th of September have been misreported. The recommendation to revise the 1st class waivers for PTPTN loans only applies to students from middle and upper income families. As it clearly states in the full report, 1st class waivers for PTPTN loans for students from low income families should be maintained. In addition, there were many other recommendations that were proposed in the Penang Institute report such as putting in an income threshold of RM3500 per month before one has to repay his or her PTPTN loan that was not covered in many of the newspaper reports)

Between 1997 and 2015, 2,464,937 loans with a value of approximately RM55.83 billion were approved for students pursuing their higher education studies in Malaysia. While it is undeniable that PTPTN has been an important factor in increasing access to higher education for many Malaysians, the financial hole which PTPTN finds itself in is very serious and will become even more serious moving forward.

Figure 1: Profit / Loss of PTPTN with and without government grants 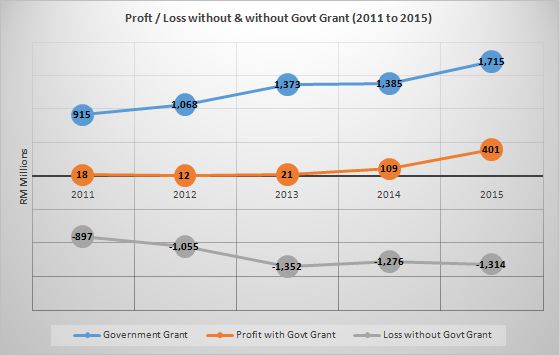 The amount of government grants has almost doubled from RM915 million in 2011 to RM1.715 billion in 2015, mostly to cover the growing interest payments which PTPTN has to pay out to banks and the EPF for the money it has borrowed from them. To give a picture, interest servicing costs as a percentage of total expenses reached a high of 81.5% in 2011 before coming down to 75.5% in 2015. Interest servicing costs reached a high of RM1.519 billion in (Figure 2 below). 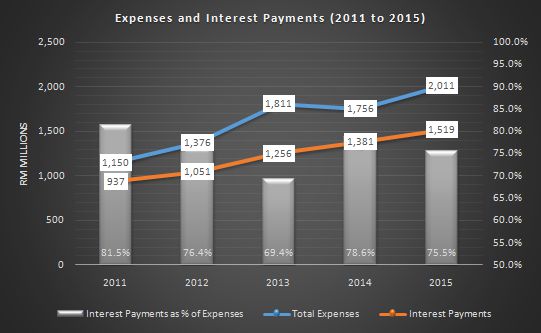 Penang Institute is proposing 9 recommendations to address the financial problems faced by PTPTN.

This survey, which would be carried out by an independent survey firm, would collect data on the financial patterns of fresh graduates, such as the distribution of starting salaries, the type of jobs held vis-à-vis qualifications, other loan obligations besides PTPTN, daily and monthly expenses such as rent and other types of expenditure. The 2015 survey commissioned by PTPTN involved a very small sample of 200 respondents and did not include crucial information such as starting salary, type of course and the type of the IPTA or IPTS.

With more concrete data, PTPTN would be better-placed to introduce new policies such as income contingent loan repayments, variable interest rates and means tested loans (see below). Going a step further, the Ministry of Higher Education would be able to evaluate important trends such as completion rates in individual colleges and universities, as well as starting salaries of fresh graduates by course and individual colleges and universities. Overall, this would help in better planning for the higher education needs of the country moving forward.

(ii) Loan repayments should be contingent upon income

To ensure that low income earners are not excessively burdened by PTPTN loan repayments, graduates should have the option of repaying their PTPTN loans only if their monthly income exceeds a minimum amount, at say RM3500.[1] On top of this, monthly payment instalments could be capped at a percentage of borrower’s income, say 10%. (Those who earn below this income threshold but who want to start repaying their loans should be allowed to do so).

Currently, PTPTN charges a 1% annual interest rate on its loans under the Ujrah repayment scheme. This is far below the 4% interest rate on government housing loans borne by civil servants. The interest rate subsidy on PTPTN loans should be reduced or removed completely. Coupled with the income contingent payment, this would make PTPTN loan repayments more equitable as even if the loan holder is charged a higher interest rate, he or she would only need to start repaying once above a certain threshold income. Such policies are already in practice in the UK, where student loan holders are charged differential interest depending on income level.

In order to increase loan repayment rates, repayment should be automatically deducted from the salaries of those graduates who are already eligible to service their loans. This mechanism is already in place for EPF and SOCSO contributions. It is also a common practice in countries like Australia where automatic deduction amounts are adjusted according to the amount of salary earned.

Currently, the amount of money that an individual can borrow from PTPTN is contingent on his or her family income. For example, a student from a family with household income exceeding RM800 a month would be able to borrow up to 50% of the maximum loan amount. But this is still not proper means testing. Students with parents earning over RM20,000 a month, for example, would still be eligible for a PTPTN loan. PTPTN loans should be properly means tested so that those above a certain monthly income threshold e.g. RM10,000 should not be eligible to take out a loan.

Current PTPTN policy dictates that a loan must be repaid within 5 to 15 years. Extending the length of the loan period beyond 15 years would allow struggling loan holders to reduce their monthly repayment obligations and so ease their financial burdens.

(viii) Shifting some of the loan burden to the private sector

Rather than relying totally on PTPTN to provide student loans, the government should shift part of the burden to the private sector. On its part, the government can provide loan guarantees similar to the My First Home financing scheme for first time homebuyers, whereby 10% of the total loan amount is guaranteed by CAGAMAS.[2]

(ix) Consider a larger reform of the higher education sector

While the paper has focused directly on PTPTN, the government’s strategic plans concerning higher education also have a significant impact on the agency’s financial position. For example, the government envisions a rapid expansion in the number of students in IPTS but it has given little thought as to how these students will fund themselves, and the likely impact of this increase on demand for PTPTN loans. An attempt to address PTPTN’s underlying problems should incorporate a fundamental review of the current Higher Education Blueprint, including re-examining the balance between IPTA and IPTS students, their respective funding models and assessing the quality of these higher education institutions.

Will these measures be sufficient to address PTPTN’s woes? One cannot say for sure but if nothing is done, then PTPTN’s balance sheet will continue to be a ticking time bomb that is just waiting to explode.

(The full report and presentation are available on the website of Penang Institute: www.penanginstitute.org)