Press Release by the Penang Institute in Kuala Lumpur on the 9th of October, 2016

The report, released on 9th October, highlighted key issues that are delaying projected economic development as per the government’s Economic Transformation Programme (ETP). These included low levels of high-skill job creation, an increasing proportion of the labour force in vulnerable and informal employment and rising youth and graduate unemployment and underemployment.

Broadly speaking, there has been significantly inequitable job distribution across sectors and states. Based official data and information from various industry sources, the report tracked labour market growth on a monthly, quarterly and yearly basis between 2010 and 2015. It was found that, while job generation has improved significantly, employment opportunities are mostly focused in industries that typically require mid-low skill workers. By contrast, the growth of high-skill jobs largely slackened between 2010 and 2015.

Since the launch of the ETP, 2.2 million net jobs have been created in Malaysia which is 2/3rds of the ETP’s target of creating 3.3m jobs by 2020. However, a majority of these jobs are concentrated in middle–to-low skilled occupations such as wholesale and retail, accommodation and social work activities, according to the report. In addition, job creation targets for the education and financial sectors under the ETP have not been met. 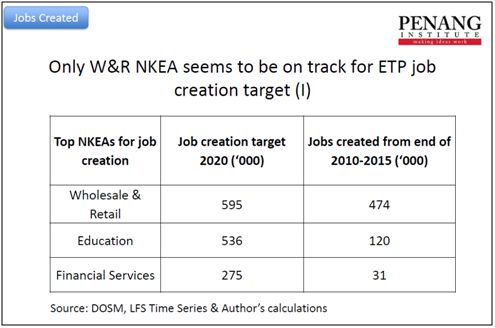 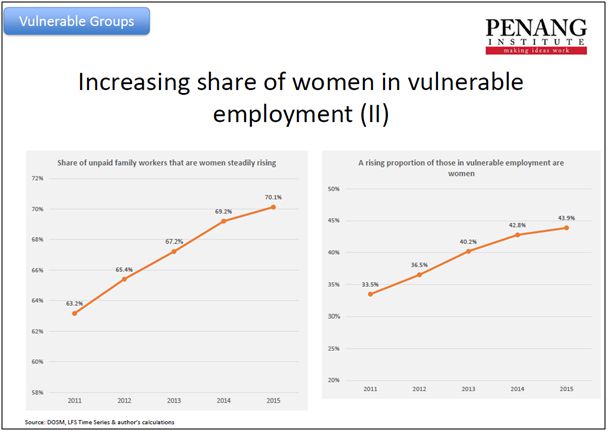 According to the latest Informal Sector Workforce Survey Report, the proportion of workers in the informal sector has increased from 9.3% in 2012 to 11.4% to 2015, with a 10.3% CAGR over the same period This rise reflects a growing proportion of the working population that are employed with little social or legal protection. [4]

Youth underemployment is another salient issue affecting Malaysia’s economy. In 2015, the youth unemployment rate for those aged between 20-24 stood at 9.3% which is three times the national unemployment rate. Not surprisingly, those in this age cohort (20-24) made up more than 40% of total unemployed persons. 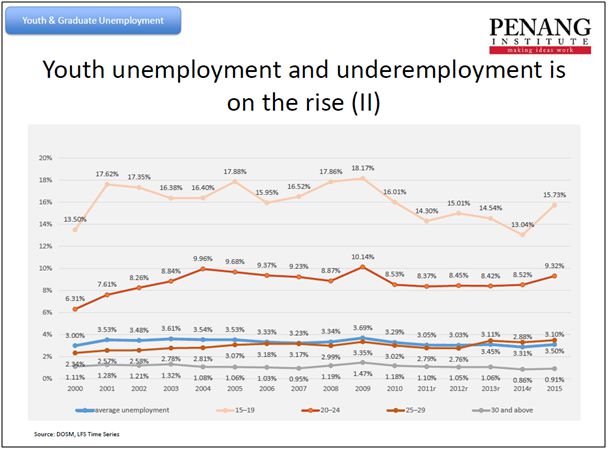 At the same time, the gap between tertiary unemployment (which stood at 3.8% in 2015) and the overall unemployment rate (3.2%) has also grown over time. This highlights the growing problem of unemployed graduates in the country. 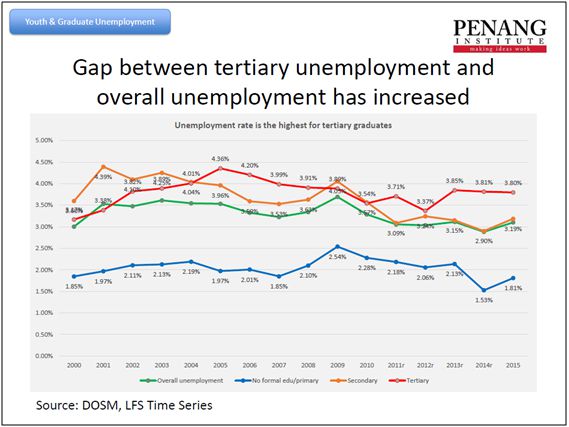 One of the main reasons for the rise in graduate unemployment and underemployment is the mismatch between job qualifications and type of available jobs. The number of high-skilled jobs just has not kept pace with the number of graduates entering the workforce. 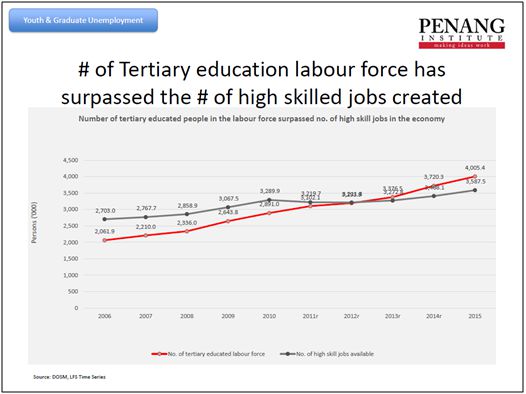 Finally, the report also highlighted the problem of downward wage pressures at the lower end of the salary distribution scale. This was mainly due to absorption of low-skill jobs by foreign workers. In the past five years, foreign labour rose from 1.8 million to 2.1 million, excluding undocumented workers, which command an estimated figure of 1 million, possible much higher.

According to the report, 317,000 of 2.2 million new jobs created in the economy have been captured by the foreign workforce. Percentage-wise, this works out to approximately 14.4% of new jobs which are concentrated in elementary sectors such as agriculture, construction and manufacturing.

The group which feels the impact of foreign labour the most are the unskilled and lowly educated members of the workforce who are Malaysians. One side effect of this pressure is the high numbers of Malaysians with pre-tertiary qualifications applying for low level positions within the civil service. There were 1.6m applications for jobs in the civil service in 2015 out of which only 1.9% were successful. The majority of these applications were for positions which only required an SPM (or lower). 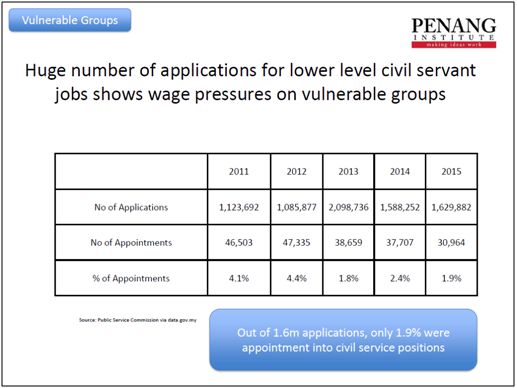 Given these challenges, Penang Institute recommends the following steps to be taken including:
I.    Reduce overreliance on cheap foreign labour. Government and private sector to collaborate and devise a workable policy that will limit the number of foreign workers in the country according to a planned timeline including further increases in the foreign workers levy.
II.    Reward companies in labour intensive industries that take the initiative to plough into R&D efforts and technological upgrades via a dedicated capital investment fund.
III.    Ensure greater industry-college linkages especially for the Technical and Vocational Education Training (TVET) institutions which is one of the key areas of emphasis under the Malaysian National Education Blueprint 2013-2025.
IV.    Have more direct intervention in the education system to improve the quality of graduates, especially in terms of improving fluency in English, numerical skills and other soft skills.

[1] This report was prepared by Lim Ping Jun. She can be reached at pingjunlim@gmail.com.
[2] The International Labour Organization (ILO) defines vulnerable employment as the sum of the employment status groups of own-account workers and unpaid family workers. Workers engaged in vulnerable forms of employment tend to earn low wages and are less likely to enjoy good work conditions or
adequate social security.
[3] CAGR = Compounded Annual Growth Rate
[4] The informal sector consists of informal enterprises that are not registered with authoritative bodies and have fewer than 10 employees. There is greater risk and instability in informal employment since it lacks the legal protection and employment benefits found in the formal sector.