GST Is A Regressive TAX

To address the fiscal deficit, the Goods and Services Tax (GST) will be implemented from 1 April 2015. Our analysis shows that at 6% GST, prices could go up by as much as an additional 3.38%. GST will raise RM 6 billion from households (ignoring any fraud). Despite setting essential items like basic food, public transportation, education and healthcare as exempt or zero rated items, we show that GST is a regressive tax (i.e. the lower income households will bear a higher tax burden than the higher income households). Using 6% as the standard GST rate, the average household is expected to pay 2.52% of monthly income as GST (equivalent to RM 90 per month). 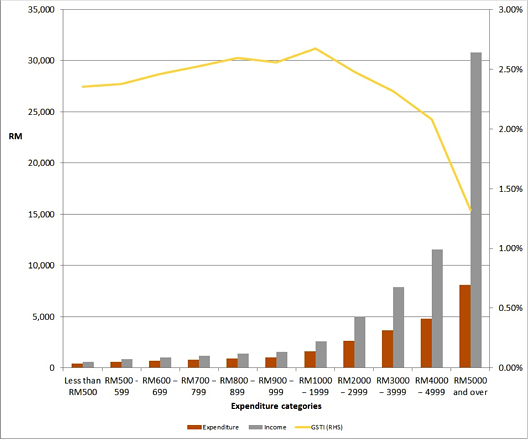 Apart from hitting the low to middle income households, we also find that households will pay higher percentage of their income as GST if they are:
·       engaged as technicians, clerical and services workers, farmers and fishermen
·       in single person household
·       in young households (less than 24 years old)
·       Bumiputera-led households
·       households residing in Peninsular Malaysia

For more information and our interactive spreadsheet detailing the impact on different households, visit:
https://www.penanginstitute.org/gst/