New research from the Penang Institute shows that graduates may have to wait more than fifteen years after leaving school and more than a decade after graduation before the total value of their studies catches-up to people who entered the workplace straight from school.

Using industry data and standard investment evaluations the researchers showed that the net-present value of the costs of higher education take many years to break-even in their own terms and even longer to out-perform non-graduate returns.

“In investment terms it can take a long time for the costs of higher education to pay-off,” says the study author and Penang Institute fellow Dr Geoffrey Williams,

“Graduates can be in their mid-30s before they see a better return overall compared to non-graduates.”

“By then they often need to invest more money in professional qualifications and master’s degrees to move their careers forward,” he added.

The two important factors are first, the costs of higher education, made up of tuition fees and lost income during the study period and second, the salaries of graduates after their studies are completed. 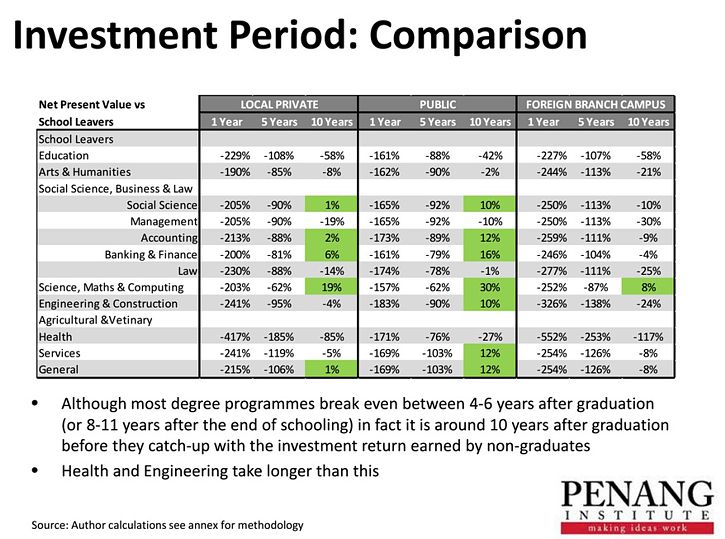 The costs of studying for a degree have to be recovered from salaries after graduation, which vary according to the career followed. In the short term ICT, Accountancy and Engineering degree holders have the best starting salaries but in the long term Social Science and other general degrees pull ahead according to the research.

“Students from Public Universities have a significant advantage over those from the private sector – due mainly to lower costs,” said Williams. “Students from public universities are able to break even earlier, around 4 years after graduation compared to 5 years for private universities. They can also catch-up to non-graduates earlier.”

“Graduates from Foreign Branch Campuses pay higher fees and so they break even later, around 6 years after graduation but may not catch-up to non-graduates for more than a decade after graduating or up to fifteen years after leaving school,” said Williams.

Finally, Williams pointed out that “if we compare the rate of return against a standard investment such as the Employees Provident Fund over the same period we can see that in many cases investing in an EPF account would give a better return than investing in higher education”.