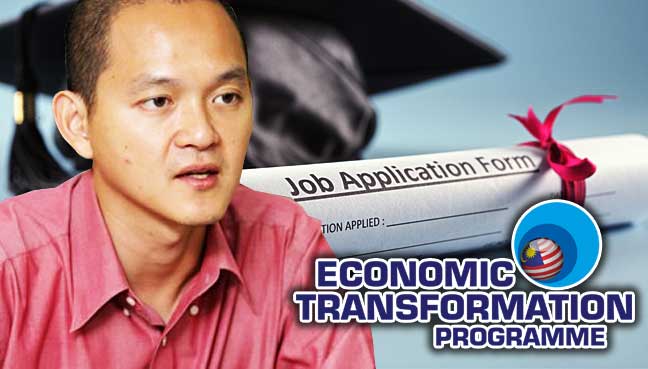 PETALING JAYA: The government’s Economic Transformation Programme (ETP) for the period 2011-2015, has not brought about the intended result of creating more high-skilled jobs for local graduates, according to a report by the Penang Institute.

The think-tank added that for the same period, however, the number of new graduates has continually increased year after year.

As a result, the lack of jobs to sustain that growth has contributed to the rise in unemployment among graduatees, the Malay Mail Online (MMO) reported.

This was revealed at a forum to launch the “Jobs and the Labour Market in Malaysia under the Economic Transformation Program (ETP) 2011 to 2015” report by Penang Institute, hosted by the Research for Social Advancement (Refsa) Library in Kuala Lumpur yesterday.

Penang Institute’s Dr Ong Kian Ming said graduates are losing out on the employment scene and are thus, forced to try for entry-level positions just to earn a steady income.

“The percentage of high-skilled jobs actually decreased, so what they are forced to do is they have to go down the economic ladder, go and find jobs that are in the middle scale and sometimes even the lower scale.

“And some of them actually apply for the entry-level positions in the civil service even though they are way overqualified,” Ong said, according to the news portal.

He also noted a disturbing statistic showing that the unemployment rate among youths aged 20 to 24 (graduates and non-graduates) last year stood at 9.3 per cent, which was three times the overall unemployment rate.

Those falling under this age group also made up 42.06 per cent of the total number of unemployed Malaysians in 2015. The second largest age group were those aged 25 to 29, at 20.36 per cent.

He added that this trend of the growth rates of graduates being higher than the growth rate of high-skilled jobs started after the ETP took effect in 2011. Prime Minister Najib Razak had launched the ETP on Sept 25, 2010, as part of Malaysia’s National Transformation Programme.

“You can see around 2011, the number of graduates with degrees have overtaken the number of jobs that are available that are considered high-skilled. This explains the increase in unemployed graduates and a lot of graduates going into the informal sector, because there are just not enough jobs,” Ong was quoted as saying by MMO.

He added that the report by the think-tank showed that the number of graduates have been on a steady increase since 2011, over the past five years, putting the number at 4,005,400 for last year.

“This is against the number of high-skilled jobs available growing at a slower pace to 3,587,500 the same year.”

Another interesting statistic related to unregistered businesses, with less than 10 employees, as well as those involved in ride-sharing services, Uber and Grab, where the number of graduates “employed” had risen from 89,900 in 2012 to 166,200 in 2015.

Ong, who is also the general manager of the Penang Institute’s KL office, admitted that the youth unemployment rate in Malaysia is relatively lower than other countries but warned against the long-term impact of the growing number unemployed graduates.

“The rising number of youths facing joblessness is opportunity cost and ‘wage scars’, in terms of lower pay and reduced life chances in their future work path, since the longer you are unemployed in the formal sector, the worse it looks on your CV,” MMO quoted him as saying.