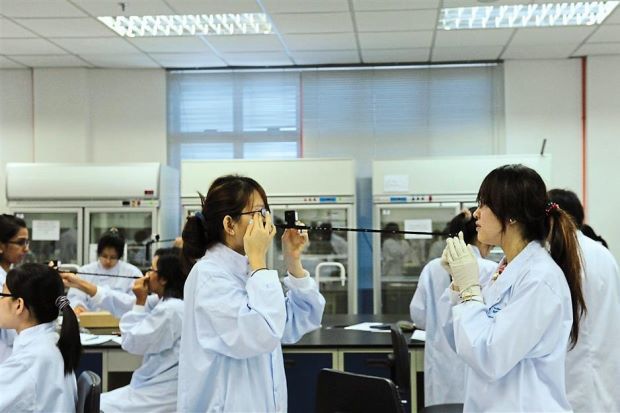 Female power: There is a growing presence of females in local varsities and that does not exclude those in the sciences. –File photo

MALE undergraduates in our public universities may become a rare species, states a report authored by the Penang Institute. In the report unveiled last week, over half of the public institutions of higher learning (IPTAs) in Malaysia have more female students compared to males.

Researchers arrived at their conclusion based on the Gender Parity Index (GPI), which is calculated by dividing the total number of women over the number of men, rounded up to two decimals.

For example, an institution with GPI score of 2.0 means that there are twice the number of women compared to men.

A comparison between Universiti Malaya (UM) with other premier universities reveals that the gender gap against men in UM is higher compared to its foreign counterparts.

This was a drastic reversal compared to 1959, where female undergraduates comprised 10.7% of the student population, giving a GPI of 0.11.

In comparison, the National University of Singapore, which shares a common history with UM, has nearly equal numbers of males and females.

Using the Unesco definition, UM is exhibiting extreme gender disparity, though it is not alone in this situation as 12 out of 20 of public universities also have a GPI score of over 1.5.

Eight of these universities have a GPI of over 2.0, indicating that men are outnumbered by more than two to one there, with UPSI coming out on top with a GPI of 2.89, followed by UMT at 2.68.

The Penang Institute report added that gender disparity in IPTAs has been increasing over the years.

Data from the Higher Education Ministry found that gender disparity is highest in education (2.37), as well as health and welfare fields (2.51). Women also outnumber men in fields related to science, mathematics and computers (1.69), though the report noted that men still dominate in engineering, manufacturing and construction.

“However, women in Malaysia have far greater representation in this field compared to many developed nations. Forty five percent of engineering undergraduates in Malaysia are female, compared to 17% in the United States,” it continued.

The inescapable questions arising from this report is: Should we be concerned about the career trajectory of the “missing” boys, and whether their glaring absence from IPTAs will have any bearing on crime and other social indicators.

The report conceded that the dynamics behind this gender imbalance is still not well understood, but suggested that the academic achievement gap between boys and girls that exists from a young age could be one explanation.

“Further research needs to be done to evaluate if this significant female-male enrolment disparity in the public universities translates into significant differences in socio-economic indicators in the country.

“In addition, careful attention needs to be paid to see if the recent emphasis on technical and vocational education and training is sufficient to narrow the gender disparity in post-secondary education.”