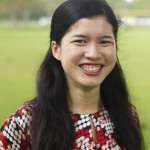 Hwa is currently doing education policy research at the Penang Institute in Kuala Lumpur, Malaysia. After earning an M.Phil. at the University of Oxford in 2013, she taught in a high-need school for two years with Teach for Malaysia. Her plan for graduate research at Oxford is to acquire expertise in education policy. Afterward, she plans to work in the Malaysian government or at a research institute or university doing policy research.

There are two rounds in the application process for the Gates Cambridge Scholarship. The first is for U.S. citizens, and the second is for non-U.S. citizens. In the international competition, 3,730 applicants applied, 101 were invited for personal interviews and 55 were awarded scholarships. Candidates are selected on the basis of intellectual ability, leadership potential, a desire to improve the lives of others, and the ability to be a good fit at Cambridge. In total, 90 scholarships will be offered this year.

The scholarships were established in October 2000 with a donation of $210 million to the University of Cambridge from the Bill & Melinda Gates Foundation.