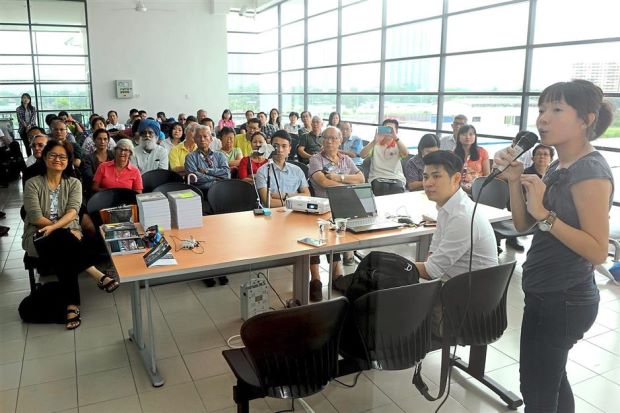 The story of a town: Koay speaking on the rise and transformation of Bukit Mertajam during the Seberang Prai Story Lecture. With her is Chan (seated, right).

UNKNOWN to many, Fui Chiu Hakka clansmen were among the pioneer settlers in Bukit Mertajam.

These Chinese migrants from Guangdong province grew spices and were involved in granite production back in the 1800s, said Penang Institute research analyst Nicholas Chan.

He said the clansmen first settled at the foothills, hence the town’s Chinese name ‘Da San Jiao’ (‘Foot of the Big Hill’ in Mandarin).

“The Fui Chius were naturally suited for the job because they were deft at working on mountains in China.

“The hilly areas near St Anne’s Church and Berapit favour the planting of spice such as pepper, clove and cinnamon,” he said in his presentation, From Agrarian Village to Urban Centre: The Rise and Transformation of Bukit Mertajam from 1800s to 1950s, at KTM’s Butterworth Station on Saturday.

This was part of the Seberang Prai Story Lecture series aimed at creating awareness of the mainland’s history and heritage.

It was jointly organised by Penang Heritage Trust and Think City Sdn Bhd.

He said an 1861 itinerary written by colonial officials referred to the hill as “Bukit Martajam”, while the settlement was “Martajam Village”.

“The name could have been a native reference, since the hill is the highest outcrop in the area.

“But it is uncertain who first coined it,” he said.

Chan, who specialises in political and social analysis, believes that Bukit Mertajam’s founding coincided with the British’s short-lived vision of making Penang a centre of spice cultivation.

He said Sir Francis Light did not focus on maritime trade when he first came in 1786.

“Instead, he first raised revenue through agriculture. Spices were the first choices due to high demand abroad.

“The ceding of Province Wellesley (Penang mainland) to East India Company in 1800 enabled the spice planting enterprise to boom,” he added.

Chan said the history of the town went through sequential eras of commercial cash crops — spices, sugar and rubber.

He added that two places of worship — Hock Teik Cheng Shin temple and St Anne Church — were built in 1886 and 1888 respectively.

As the population grew, the late 1890s saw the setting up of colonial amenities such as a hospital, water reservoirs, a courthouse and government-funded vernacular schools.

He added that Bukit Mertajam was made the administrative capital of the central district of Province Wellesley.

She added that the Act created the Butterworth Municipal Council and the Rural Boards in the northern, southern and central districts.

“But the turning point was no coincidence.

“From 1900 to 1905, Bukit Mertajam had the highest revenue collection compared with Butterworth and Nibong Tebal,” she said.