Chief Minister Lim Guan Eng made the announcement during the inauguration of Penang Institute at the Town Hall on Friday.

Liew said the move was timely since he was holding the post in a transitional role.

“I’m a politician and it’s better that the position is filled by an economist.

“Penang Institution is fortunate as Dr Woo comes with an impressive resume,” he said. 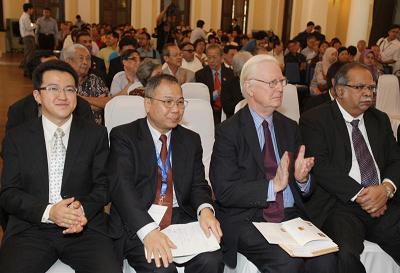 Dr Woo is currently Professor at the University of California at Davis and Senior Fellow of the renowned Brookings Institute.

In July 2005, he was appointed a member of the International Advisory Panel which was convened by the then Prime Minister (Tun) Abdullah Badawi to assist Malaysia.

He was appointed chairman of the International Economic Advisory Panel to the Penang Chief Minister in April 2009.

SERI was formed in 1997. It was renamed Penang Institute on Aug 1 this year as part of its transformation process.

During the event, Professor Sir James Mirrlees, winner of the 1996 Nobel Prize in economics, gave a lecture on global finance.

This article appeared in The Star, December 14th 2011.