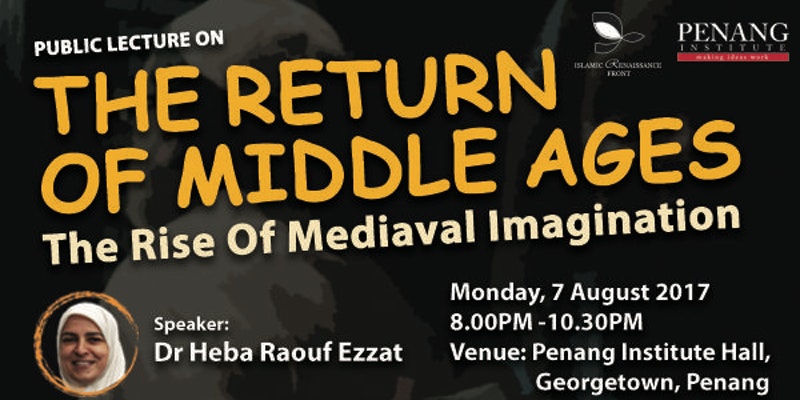 Penang Institute, the public policy think tank of the Penang State Government, in collaboration with Islamic Renaissance Front, is proud to host a Lecture entitled The Return of the Middle Ages: The Rise of the Medieval Imagination by Dr Heba Raouf Ezzat which is scheduled as follow:

ABOUT THE LECTURE
The “caliphate” has always been a symbol of Islamic unity, piety, and prestige and has been the zeal of many Muslims across the world. The caliphate, as a political system has already been abolished twice. First time around was during the reign of the Abbasids after the destruction of Baghdad by the Mongols in 1258, while the second time was after the legislative abolition of the Ottoman caliphate by the nationalist Turkish assembly in 1924. Yet, among Muslims in modern times, many are still arguing for the Caliphate to be a form of a modern state. Could the movement for the re-establishment of a Muslim Caliphate manifest into a form of Muslim Zionism?

The state established by the Prophet Muhammad in Medina was extremely rudimentary and lacked any of the institutionalization connected with modern states. Would it be sufficient to declare a state based on Sharia and later expect everything will be perfect? There has been a medieval imagination among many Muslims that a Sharia based state can be a quick fix to all problems plunging the Muslims, but they do not understand that the Sharia of classical times was not something imposed or enforced because the resources and means for the kind of intrusive enforcement used by modern states did not exist during that time. Though, it could be said that the supporters of the “Caliphate” in modern times, who want and urge for an authoritarian, authoritative, and institutional state, are innocent as they have not yet perceived the moral consequences of this choice of theirs. This issue is a political issue albeit a very delicate one.

Reflecting on the current state of the modern world where a lot of Muslims are bringing themselves to join and justify their allegiance to a Caliph, we must thus address this issue and try to go about understanding the consequences of having such a medieval imagination of a state reign by a Caliph under the pretext of Caliphate in the current time.

ABOUT THE SPEAKER
Dr Heba Raouf Ezzat graduated from Cairo University and taught at the political science department for almost thirty years. She also was an affiliate professor at the American University in Cairo (2006-2013) where she taught courses on political Islam, contemporary Arab thought and political thought and theory. She published widely on classic and contemporary Islamic thought, issues of Globalization, women and Islam, and urban politics. She has also been active in the public sphere in Egypt, as the coordinator of many youth initiatives and a public speaker/ commentator. Her latest publications include two books in Arabic: Towards a New Civility and The Political Imagination of Islamists. Her translation of Ziauddin Sardar’s book on Mecca into Arabic is due to appear in bookstores September 2017.

ABOUT THE DISCUSSANT
Dr Wong Chin Huat is the Head of Political Studies Programme at Penang Institute. Having earned his doctorate from University of Essex on electoral system and party system in Malaysia, he is now intrigued by the question “Can citizens be different yet equal?” which leads his interests in decolonisation, secularism and political Islam.