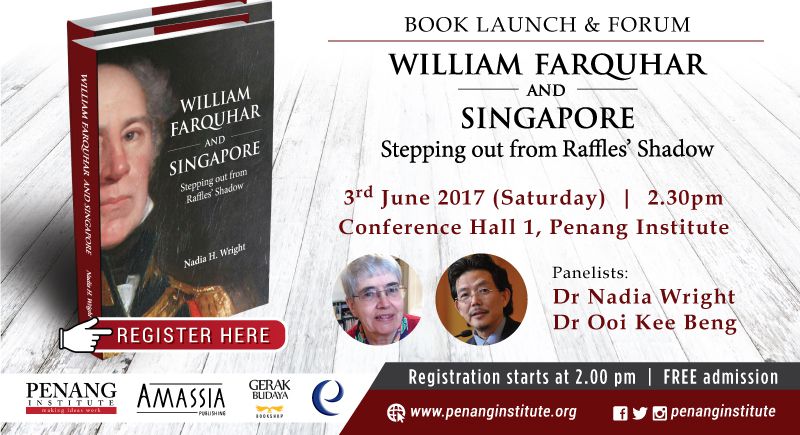 Penang Institute, the public policy think tank of the Penang state government is proud to host a forum and book launch of William Farquhar and Singapore: Stepping out from Raffles’ Shadow by Dr Nadia H. Wright, which is scheduled as follows:

When the achievements of great individuals are exaggerated, an enormous shadow is cast over the work of their subordinates. This happened in accounts of the founding of the British settlement at Singapore in 1819 in which Sir Stamford Raffles has been aggrandised at the expense of Major General William Farquhar. Venerated by contemporary Bugis, Chinese and Indians for his character and accomplishments, Farquhar claimed that he was largely responsible for Singapore’s rapid development and commercial success. However, his claims have largely been obscured by the glorification of Raffles.

In this ground-breaking and carefully documented book Nadia Wright re-examines both East India Company records and contemporary material to investigate the input of Raffles and Farquhar into Singapore’s founding and development. This book reveals new and sometimes startling insights into the achievements and personalities of both men, and explains why Farquhar was overlooked for so long.

The book will be officially launched by Dato’ Dr Anwar Fazal, Chairperson of Think City and Director of Right Livelihood College.

The forum panelists are:

The forum will be moderated by Gareth Richards, writer, editor and bookseller.

Due to limited seating for each of the forums, we require your kind assistance to reserve your participation as soon as possible. Please click https://farquhar.eventbrite.com for registration.