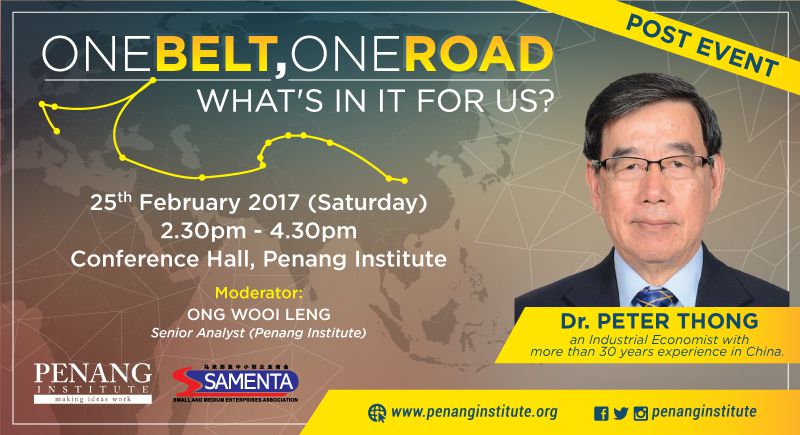 Penang Institute co-organized a forum with the Small and Medium Enterprises Association (SAMENTA) Malaysia entitled One Belt One Road (OBOR): What’s in it for us. Dr Peter Thong, Director of China International Council for the Promotion of Multinational Corporations was invited as the guest speaker.

Dr. Thong gave a historical account of how the OBOR initiative reflects the ancient Silk Route which was established by the Han Dynasty in 206BC, highlighting that the Silk Route was not only one of trade and commerce, but also of exchanges in culture which can only be built on trust among countries which were involved. He described China’s unprecedented economic growth in the various sectors like the automobile industry, real estate development and manufacturing which grew China’s GDP to US$10.289 trillion in 2015 from US$36 billion in 1975. Dr Thong opined that the OBOR initiative has its roots in China’s desire to share this growth beyond their borders.

Projects under the OBOR initiatives around the world ranging from Russia’s Euro-Asia Railways to a logistics terminal in Kazakhstan were highlighted. Domestically, projects worth around RM144 billion have been signed between China and Malaysia during the Prime Minister’s visit to China in November 2016. Dr Thong averred that the OBOR initiative will carry on regardless, and it is therefore up to the business community to take advantage of this initiative or let this opportunity slip by. He addressed the business community by highlighting key sectors which he identified as business opportunities in the OBOR initiative. These include ICT, e-commerce, eateries, automobile, real estate, manufacturing, consumer goods and education.

Dr Thong concluded with a take-home message where despite OBOR being a business opportunity, firms and SMEs have to also identify associated risks and manage them well so as to fully capitalize on this opportunity.