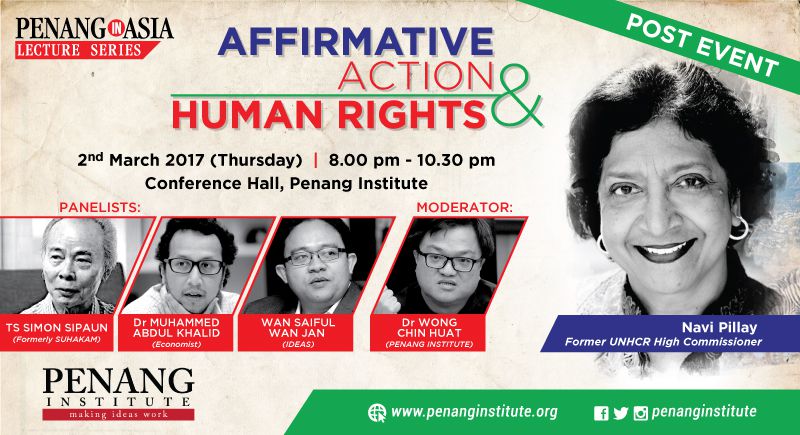 On the 1st of March, 2017, Penang Institute hosted Judge Navi Pillay, former United Nations Human Rights Commissioner, to present a lecture on the topic “Affirmative Action in Malaysia: Who Gains? Who Loses?”, with panellists Dr Muhammad Abdul Khalid (former Research Director of Khazanah Research Institute), Mr Wan Saiful Wan Jan (CEO of IDEAS), and Tan Sri Simon Sipaun (former Human Rights Commissioner for SUHAKAM) weighing in in a panel discussion moderated by Dr. Wong Chin Huat.
The Chief Minister of Penang, Yang Amat Berhormat Mr Lim Guan Eng gave the opening address, where he discussed the two broad arguments for affirmative action. The first argument, based on enlightened self-interest, pointed out that a marginalised society may choose to disrupt the existing socio-political and economic system because they felt left behind. In this sense, affirmative action will act as a measure to uplift them socially and economically. The second argument for affirmative action referred to the idea that each human being should care for its fellow humans, and ensure that it is a right that everyone can live a dignified and fulfilled life. One may believe in solidarity and inclusion, but for affirmative action to truly work, it must not be abused. Affirmative action should serve to empower the marginalised members of our society but not to control. Therefore, the human right language is needed to articulate and frame issues related to affirmative action, in order to ensure its effectiveness and its freedom from corruption and cronyism.

Judge Pillay, in her lecture, disclosed that she herself was a beneficiary of affirmative action, combined with individual and communal effort and perseverance. An outspoken critic of the South African apartheid regime, she stressed that historically, black Africans have been denied human rights, civil, political, economic, social and cultural rights. Human rights, Judge Pillay declared, are universal, inter-related and indivisible – and must be made accessible to everyone without discrimination. South Africa’s Black Economic Empowerment Program (BEE) is not without its problems. Established as an affirmative action policy for black South Africans, currently there is massive disillusionment, with unemployment and income equality levels remaining high. Land ownerships remains a burning grievance. Affirmative action policies in South Africa have produced minimal benefits for the entire group, as the principal beneficiaries are the elites with connections to the politicians.

Judge Pillay touched on the differences between affirmative action in Malaysia and South Africa. Malaysia’s affirmative action plan – the New Economic Policy – was not formulated as a response to colonial racist domination, but rather the prevalence of cultural diversity and economic inequality. Not unlike BEE, NEP had served its purpose to an extent, but ultimately, the grass root community still do not have bright prospects in social upward mobility as NEP mostly benefitted the elites and the politically connected. And unlike South Africa, which has an independent judicial system to at least have a measure of check and balance, Malaysia’s judiciary system is not independent of the ruling government. She also reminded the floor that Malaysia has adopted the Sustainable Development Goals, which proclaimed that human rights and equality has to be within the framework of a nation’s development policies.

Tan Sri Simon Sipaun weighed in on the debate, echoing the perspective of Judge Pillay that affirmative action has made a big difference in the lives of many Malays in Malaysia, but more so for the well-connected elite Malays. He went on to say that the majority race controlled political power and all that is associated with governance. Being that the NEP is associated with race and religion more so than needs, Tan Sri Simon saw the NEP as a dividing factor for the country, instead of unifying the country, as its original function was incepted to be.

To sum up, Judge Pillay and the three panellists all presented measured, thoughtful arguments with regards to the debate surrounding affirmative action policies. As a conclusion, it is reiterated that with or without affirmative action policy, socio-economic and political inequality among the layers of society undoubtedly needs to be addressed, to ensure that a nation’s development is sustainable and inclusive.