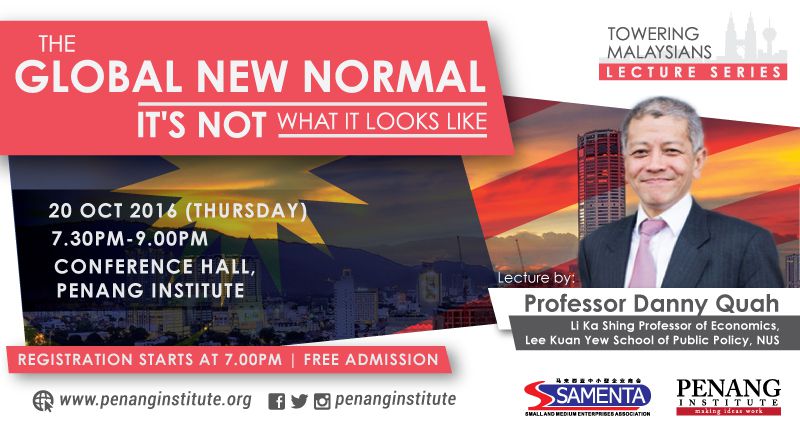 Penang Institute is proud to bring you yet another lecture under the Towering Malaysians Lecture Series by Professor Danny Quah entitled “The Global New Normal – It’s Not What It Looks Like“. You are cordially invited to attend this lecture as scheduled below:-

ABOUT THE LECTURE
Geopolitics might be in turmoil​ but why should that matter to the average Malaysian?  The entire world used to run on rules of engagement drawn from past historical success: What worked – in practice, in theory – is what we applied to improve our economies, to make politics serve the people. But with Brexit, with Trump, the west no longer brandishes the high ideals that attracted the affection of the entire world, and that helped keep that world safe and increasingly prosperous. What happens when everything no longer works that used to, ranging from how nations engage with one another, to who in the world cheers on globalization and openness, how political leaders and elites relate to those they govern, all the way to how markets operate for people and businesses?

ABOUT THE SPEAKER
Danny Quah is Li Ka Shing Professor of Economics at the Lee Kuan Yew School of Public Policy, National University of Singapore (NUS). His current research is on an economic approach to world order: global power shift, the rise of the east, and models of global power relations.

Quah gave the third LSE-NUS lecture in 2013, TEDx talks in 2014 and 2012, and the Inaugural LSE Big Questions Lecture in 2011. He was previously Assistant Professor of Economics at MIT, and then Professor of Economics and International Development at LSE, and Director of the Saw Swee Hock Southeast Asia Centre at LSE’s Institute of Global Affairs. He also served as LSE’s Head of Department for Economics, and Council Member on Malaysia’s National Economic Advisory Council. Quah studied at Princeton, Minnesota, and Harvard.

Free admission! Due to limited seats, registration is encouraged. Kindly register your interest at this link.