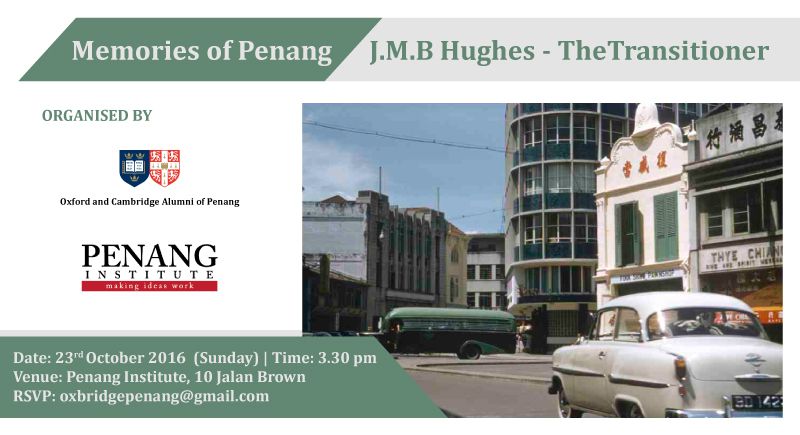 In 1957, Penang Free School, which celebrates its bi-centenary this year, was preparing itself for a new era, within an independent Malaya. This was also the year that J.M.B Hughes became headmaster. Although he had originally expected to leave Malaya soon after Merdeka, Hughes was asked by Governor of Penang to stay and ensure the transition of the school until he could be replaced by a Malayan. He left the School and Penang in 1963, having transitioned it from a British-run school to a fully Malayan school.

J.M.B Hughes’ son John, who was himself born in Penang, has recently sorted through and scanned his father’s old 35mm colour slides. He has a collection of these from Malaysia in the 1950s to early 1960s, together with some photos and cineclips, to share with us. Join us at this talk, co-organized by Penang Institute and Oxbridge Penang, to go down the memory lane of J.M.B Hughes, the last European Headmaster of Penang Free School, through his colour slides and all.

Admission is free but kindly register here or RSVP at oxbridgepenang@gmail.com