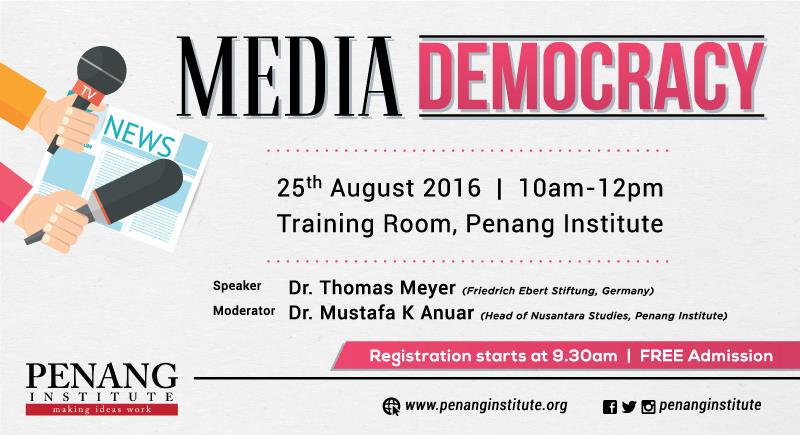 In this talk by Dr. Thomas Meyer, Editor in Chief of the Journal of Social Democracy, he will deal with these mechanisms of anti-democratic practices of “free” mass media and discuss what can be done to bring them back under democratic control.

Due to limited seats, registration is encouraged. For more information, please read more below:-

The term media Democracy has two different meanings that are delicately interconnected. The first meaning is descriptive: a democracy in which the communication media play a crucial role (which is, anyway, unavoidable in the world of today). One of the necessary preconditions for a well functioning democracy is a plurality of free mass media – free from direct or indirect government control. Yet, the freedom from government control has proved to be only the necessary but not yet the sufficient condition for a democratic public sphere. This is the frame of reference for the second (critical meaning) of the term media democracy: a polity in which the (or some) private mass media (their owners or managers) possess and exercise the lion’s share of effective political power in real terms without any democratic mandate. This setting is, due to the formal independence of these news papers or radio/TV stations in most cases not directly visible but all the more effective. Thus, it is often a greater challenge to democracy than direct government control which the different audiences are usually well aware of.

In many countries with formally free mass media a major risk for democracy comes form private mass media that are market and profit oriented and pursue their own political agenda very successfully in a broad variety of different ways. Because of that, “free” mass media instead for serving the democratic society may become political partisans that influence the formally democratic process crucially. The US is the outstanding but by far not the only example for this; the Italy of Berlusconi was another drastic case and in most other countries the problem of media democracy is a greater or smaller challenge to the democratic claim.

For political actors, campaign units, political parties and the like, it is a necessary condition for communication success to understand the filters and the logic that media always use in order to create their own biased picture of reality. The media logic is dominated by the (market oriented) strategy of entertainment. i.e. stage managing prominent personalities or spectacular events in a specific light with only a loose relation to the real world. Regularly this mediatization of the real world leads to a strong distortion of the real political scenario. This colonisation of politics by the logic of mass media is completed when politicians (what thez increasingly do everywhere in the world) use the instruments of self- mediatisation in the form of creating entertaining methods of symbolic pseudo- politics that deceive their audiences about their real purposes and measures.