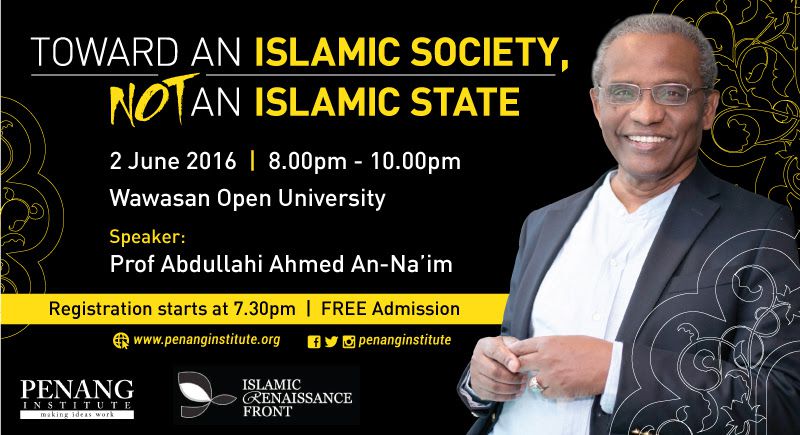 Penang Institute, the public policy think tank of Penang state government, is proud to co-host the upcoming talk with Islamic Renaissance Front (IRF) entitled “Toward an Islamic Society, NOT an Islamic State“.

One of the distinguishing features of political Islam since the fall of the Ottoman Empire was its call for the creation for an Islamic State. While the routes opted by Islamic movements differ from each other, the destination remained the same: a heavenly utopian of an Islamic community governed by Muslims with all its modern institutions of statecraft. The irony of this shared vision is that it is a strange marriage between Hobbesian idea of the state and a romanticised attitude towards the tribalistic society during the times of the Prophet.

Even up to this day, we are forced to witness the emerging of ISIS governed by the same mode of politics as articulated by Islamic movement nearly a hundred years ago. Despite their unsuccessful attempt in establishing an ideal model of a theocratic state, unfortunately, it did not dissuade the proponents of such ideas from trying to impose their political experiment unto others in the societies via force.

Despite their popularity and wide coverage in the international media, this wasn’t the only narrative that is available within the Muslim tradition. Since Arab Spring, many Muslim scholars and thinkers have spoken on the need to abandon such an out-dated notion of the state.

Some Muslim scholars and leaders – like Syeikh Yusuf al-Qaradawi or the Tunisian leader Syeikh Rachid Ghannouchi – have readily accepted the democratic principles. For them, it is not in contradiction with the idea of Islam as a political project. They argued that instead of focusing on the state, one should focus on developing Islamic societies – societies that celebrate Islamic values and principles of compassion, love and mercy–that lives harmoniously with other communities within the existing secular-democratic state.

This lecture will examine these two contrasting thoughts in further details.

As seats are limited, please register your interest below.
For further enquiries, please contact the secretariat at 04- 228 3306 or email to secretariat@penanginstitute.org.