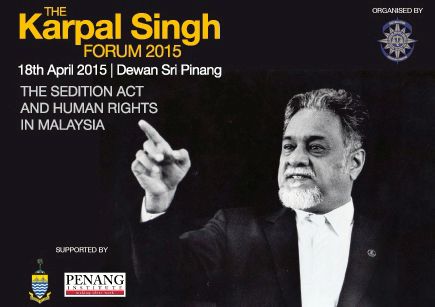 On behalf of Penang Bar Committee, Penang Institute as the supporting partner of the upcoming Inaugural Karpal Singh Forum- ‘The Sedition Act & Human Rights in Malaysia’, would like to cordially invite you to attend the forum scheduled as follow:-

Sedition and human rights has been the core of Karpal Singh’s illustrious legal career. On the 10 April 2015, The Sedition (Amendment) Bill 2015 was passed after a long-drawn debate. The new amendments has The United Nation’s Human Rights High Commissioner Zeid Ra’ad Al Hussein urging Putrajaya to withdraw its proposed amendments to the Sedition Act 1948, warning that the new provisions would seriously undermine the freedom of expression and opinion in Malaysia.

It would have been interesting to have seen how the Tiger would have argued the act in the August House. Nevertheless, we have among the brightest legal minds in the arena today to take on that duty. Join us for an interesting and insightful panel discussion with Mr. Mark Trowell QC, who once observed Karpal Singh’s sedition trial for LAWASIA; Dato’ Mahadev Shanker, a founding member of the Human Rights Commission of Malaysia; Mr. Steven Thiru, the current president of the Malaysian Bar; Dato’ Ambiga Sreenevasan, a prominent human rights advocate. The panel would be moderated by Mr. Christopher Leong, immediate past president of the Malaysian Bar.

Entry is strictly by registration only. Please register to avoid disappointment.
All entries to be received by the 14th April 2015.