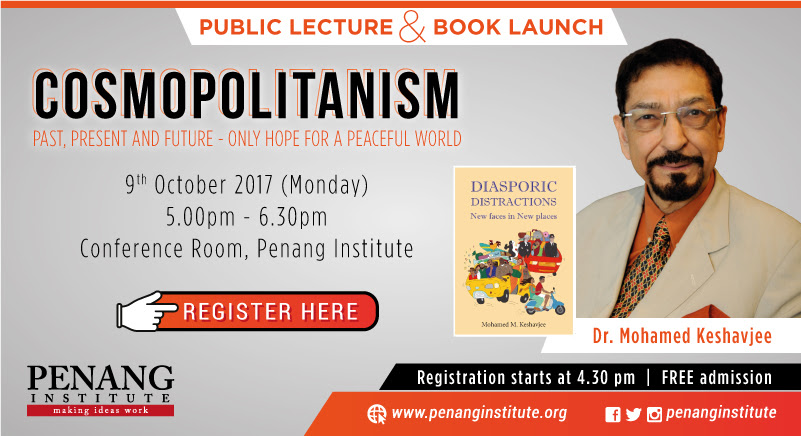 Penang Institute is proud to host a public lecture & book launch “Cosmopolitanism : Past, Present and Future – Only Hope for a Peaceful World” which is scheduled as follows:

Rapid globalisation, fuelled by the exponential rate at which technology is moving today, calls for greater acceptance of diversity and engagement. Human beings are not hard-wired to embrace and celebrate difference, but our educational offerings have to promote a healthier respect for this concept if peace in this world is to be achieved. Cosmopolitan ethics — the ethics of listening to the other even if we do not like what they are saying — entails respecting the other, celebrating their diversity and engaging with them with a view to address human needs on the basis of a shared humanity. Pluralism, a process where this engagement is possible, constitutes our greatest hope in a world that is experiencing traumatic upheavals. Dr Mohamed M. Keshavjee, lawyer, author and a global specialist on cross-cultural mediation, and recipient of the 2016 Gandhi King Ikeda Peace Award, discusses this concept in its contemporary setting.

This book, made up of 16 short stories, captures the diasporic lives of the Indians of Africa in the 1960s when the continent witnessed the historic “winds of change” which led to decolonisation. Political independence gave rise to a crisis of expectations and this called for major readjustments with the result that ethnic minorities inevitably became compromised and marginal to the process of nation building. In this book, the author Mohamed M. Keshavjee captures the mood of this period with great wit and a touch of irony. Though focusing on the African Indians, the book is of great interest to all minorities in the world who today have to contend with rising native populism fixated on a historic past that, at best, is mythical, and a rejection of the present which is myopic and irrational. A must read by all those who find the present world dystopic and xenophobic!

Dr Mohamed M Keshavjee is a lawyer and a specialist in international cross-cultural mediation. A second-generation South African of Indian origin who lived in Africa during the historic “wind of change” era, he witnessed the political independence of the East African countries, the post-independence years in Kenya and the Ugandan Asian expulsion of the 1970s, following which, he spent some years in the United Kingdom and Canada. In the 1980s he went to work in France with an international organisation and travelled extensively throughout Asia, Africa and the Middle East. During this time, he went back to university, specialised in conflict resolution and pioneered a training programme in Family and Commercial Mediation through which he trained mediators in over 25 countries. He is now settled permanently in the United Kingdom where he lectures on law and Alternative Dispute Resolution. This is his third hook. In 2016 he was the recipient of the Gandhi King Ikeda Peace Award for his global endeavours in the field of mediation. In addition to being a member of the panel of experts for the International Social Service of Switzerland, he is also a trustee of the Darwin International Institute for the Study of Compassion in the United Kingdom.

Kindly register your interest here. Please feel free to circulate this invitation to your family and friends.