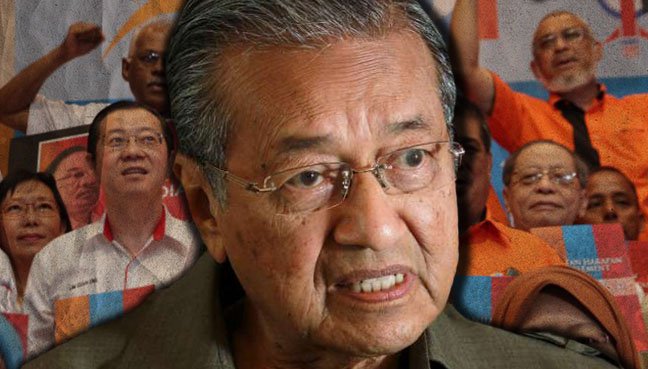 GEORGE TOWN: Former premier Dr Mahathir Mohamad, admitting that “I am not right all the time” said today that it was important to have opposition parties to keep the ruling government in check.

He said opposition politicians, as with ruling government leaders, had a common goal in giving people their best.

“Yes, we have our differences with the Opposition. And it is fine to disagree. But I also need some one to tell me I am wrong.

“I am not right all the time. Opposition members have their own ideas and so has the ruling government.

“If there is no opposition, we do not have a mirror to tell how ugly we are,” he said while speaking at a forum entitled “Quo Vadis, Malaysia?” organised by the state government think tank, Penang Institute.

Dr Mahathir said that despite not being liked by opposition stalwarts such as Lim Kit Siang and Lim Guan Eng, among others, he had kept an ear out for them.

“I listen to what they say, and I sometimes reject what they say. But if they are good, I plagiarise and make it my own,” he said to applause and laughter.

(“Quo Vadis Malaysia” or “Whither Malaysia” is a phrase that has often figured in Lim Kit Siang’s speeches and was also used for a collection of his speeches.)

Mahathir has led a year-long campaign to force Umno president and Prime Minister Najib Razak out of office because of the affairs of 1Malaysia Development Berhad. He has been seen as leading a Save Malaysia movement, which has issued a Citizens’ Declaration for Najib’s ouster.

Mahathir said it was important for the rakyat to oust leaders whom they find are unfit to lead the country. “In essence, democracy is the right to chose your own leader. If you do not like a leader, you can overthrow him,” he said.

While speaking about Najib’s rise to become prime minister, Mahathir said he was disappointed that Najib did not seek his advice as an elder statesman.

“Najib could have asked me for some advice, but he did not ask anything. So I was frustrated. I have been PM for so long, some talk would have been great. But he did not.

“Only once he came to talk (about the so-called Crooked Bridge across the Johor Straits, favoured by Mahathir to replace the Causeway),” he said.

At a press conference later, Mahathir forecast an impending erosion of federalism, in the wake of Barisan Nasional’s landslide victory in the Sarawak state elections yesterday.

He said Sarawak Chief Minister Adenan Satem could demand for more things as he liked.

Asked about a comment by Deputy Prime Minister Ahmad Zahid Hamidi that the Barisan victory was proof of Mahathir’s failure against Najib, the former premier said Zahid’s remark was expected. “Of course they will say that.”

“What is happening in Sarawak is what people perceive about the Federal Government. They are of the opinion that the state is more important,” Mahathir said.